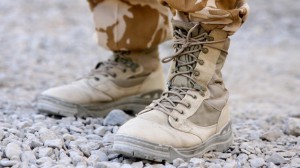 Britain is to expand its military training mission in Iraq in the coming weeks, Prime Minister David Cameron announced on Sunday, saying the Iraqi army needed more help to deal with improvised bombs planted by Islamic State militants.
Cameron, speaking before a meeting of the Group of Seven industrial nations (G7), said Britain would send 125 new military advisers to Iraq, most of whom would train the Iraqi army in how to counter improvised explosive devices or IEDs.
That will take the total number of British military trainers in Iraq up to 275, officials said, and the overall number of British personnel engaged in various roles against Islamic State across the region up to around 900.
“We’re already the second largest contributor in terms of air strikes in Iraq, and support for the Syrian opposition,” Cameron told reporters at the G7 in Germany.
“But I’m announcing today that we’re increasing our training effort in Iraq. It’s a particular request the Abadi government has made, it’s a particular thing we’ve been working with the Americans on.”
Cameron was due to brief US President Barack Obama and Iraqi Prime Minister Haider al-Abadi on the plans at the G7. He was also expected to discuss with Obama what more Britain can do to help train moderate Syrian opposition forces in locations outside Syria such as Turkey.
Critics say gains made by Islamist militants in both Iraq and Syria show that the US-led strategy against them is faltering, and that Western ground troops are needed.
British officials said the new trainers would be deployed in “a handful of locations” across Iraq including Taji, Besmaya and Al Asad. Around 100 would carry out IED training, while 25 would focus on first aid, equipment maintenance, or logistics and information support.
A spokeswoman for Cameron’s office said Islamic State routinely planted large numbers of bombs when retreating, and that training Iraqi forces to clear them would allow local people to return more quickly to their homes.
She said the deployment was consistent with the scale of Britain’s current engagement in Iraq, and did not herald deeper involvement. After taking part in the US-led invasion of Iraq to topple Saddam Hussein in 2003, Britain withdrew the last of its forces in 2011.