You are here: Home / Europe / Britain prepares to send more troops into Iraq in battle against Islamic State 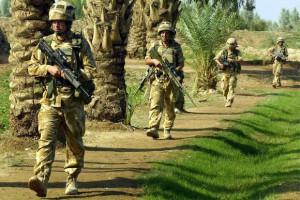 Britain is set to send troops into Iraq in support of the US military mission to train forces battling Islamic State (IS) fighters.

The plans of expanding the UK training mission, currently based in a safe Kurdish-held area of the country, were discussed during a meeting of the National Security Council (NSC) chaired by David Cameron.

A report in The Times said the Army is ready to go ahead with the expansion but needs clearance from the NSC.

The mission would involve the deployment of a specialist team of experts in countering roadside bombs – improvised explosive devices (IEDs) – to work alongside American trainers.

They would be based in the capital Baghdad but could also operate outside the city where the US is conducting training of Iraqi forces preparing to take on IS – also known as Isil.

Britain already has more than 100 personnel in the Kurdish north where they have trained 1,200 peshmerga fighters in combat infantry skills including sharp shooting, first aid, counter-IED operations and weapons maintenance.

A Ministry of Defence spokesman said: “As part of coalition efforts against Isil, UK personnel are already designing and delivering training to the Iraqi security forces which includes counter-IED training.

“Nearly 800 UK personnel are deployed on operations in the region, helping Iraqis to strengthen and mobilise against Isil, and we will continue to keep our contribution under regular review.”