You are here: Home / Mediterranean / Libya: Britain plans to hit ISIS and secret team flies in to draw up list of targets 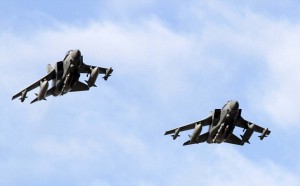 Britain is planning aerial bombings against Islamic State militants controlling parts of war-torn Libya, according to a military source.

A team of six RAF officers and MI6 operatives flew to an airbase near the eastern Libyan city of Tobruk, which is under control by internationally recognised militia forces.

Diplomats from the Foreign and Commonwealth Office and US and French military personnel also took part to the gathering, the Sunday Times reports.

The mission participants are working together to draw up a list of possible targets for future British and coalition airstrikes.

There are widespread fears that Daesh, which has seized a long stretch of coastline around the city of Sirte, wants to move its headquarters from Syria to north Africa and threaten the Mediterranean.

Over past weeks, ISIS have stepped up attacks against the country’s oil infrastructure and made the most deadly single raid since the 2011 overthrow of Muammar Gaddafi.

‘The targeting teams want to find out where the friendly militia fighters are so that any coalition strikes against Isis don’t hit them by accident,’ a British military source told the Sunday Times.

The presence of RAF officers in the reconnaissance team could indicate that the coalition is considering setting up a military base there.

Reports that British troops would be deployed to Libya as part of an international peacekeeping mission surfaced in August last year.

At the time, it was reported that American, French, Spanish and German officials would join Britain in an international mission to stabilise the country once the rival warring faction agree on forming a unity government.

But a UN-backed plan to end the 20-month civil war that has torn Libya apart is struggling to take off.

Last week, the country’s internationally recognised parliament rejected a main article in the UN accord as well as a proposed list of ministers.

It is not yet clear whether a rival parliament in Tripoli will participate and its chief said that separate negotiations without UN involvement were the ‘only solution’.

The Sunday Times also reports that Britain is preparing to send troops to train Libyan security forces against the ISIS threat.

They would not be in a combat role, although SAS troops could additionally be sent to take out Isis leaders.