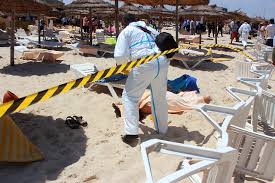 Britain has a responsibility to help Tunisia in the fight against terrorism, the country’s prime minister has said, claiming the UK is partly to blame for the “chaos” in Libya following military intervention four years ago.

Habib Essid warned against further military action in Libya, calling for a political solution in the war-torn country which has seen mounting extremist activity, including by the Islamic State group and al Qaida-linked militants.

The gunmen responsible for the attacks at Tunisia’s National Bardo Museum and the killings in Sousse three months later had trained in neighbouring Libya, according to Tunisian officials.

Mr Essid said terrorism is not just the problem of one country, telling the Independent: “Terrorism isn’t a national problem. It has no borders.

“Helping to fight terrorism in Tunisia means helping to defend themselves.”

He said the turmoil in Libya, which has been split between an elected parliament in the country’s far east and an Islamist-led government backed by militias that seized the capital, was largely caused by the intervention of countries including Britain and France in 2011.

He told the newspaper: “We are against all military intervention in Libya.

“We consider that the current situation is the result of the (2011) intervention, which created chaos.”

Asked about Britain and France’s role in helping Tunisia secure its border with Libya, Mr Essid said: ” They have responsibility. Terrorism has no borders.”

His comments come as British police said they believe the Sousse and Bardo attacks are linked.

Scotland Yard said there is “strong” evidence of a connection between the killings, which left a total of 60 people, including 31 Britons, dead.

Tunisian authorities have now arrested 150 people in relation to the Sousse killings, for which Islamic State claimed responsibility.

Fifteen of those people have been charged with terrorism offences.

Last month the UK changed its advice to Britons intending to travel to Tunisia, warning them against doing so.

Mr Essid said while he understood the reasons behind this, the advice had damaged the country’s economy, which relies heavily on tourism.

“We have this problem of the travel warning, which we understand perfectly is the act of a sovereign state, which has a responsibility to protect its citizens,” he said.

“(But) while we didn’t dispute this decision, it’s had a negative impact ( on the Tunisian economy).”