You are here: Home / Mediterranean / Britain may move ISIS war to Libya as Government fears 3,000 jihadis spreading across Med 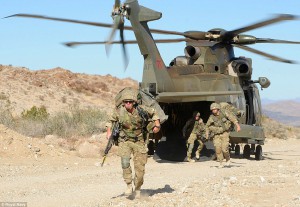 The next target for Britain’s military action could be Libya as fears heighten over Islamic State militants and that it could be used as a gateway for Europe.

The Foreign Office and the Ministry of Defence have said that they are worried about the rise of extremist groups in the region and fear they could target Europe next.

He said: “We are at war. We have an enemy that we must fight and crush in Syria, in Iraq and soon in Libya, too.”

France has sent spy planes over Libya to assess the threat posed by the country.

The UN thinks that 2,000 to 3,000 fighters are in Libya and Isil’s control of the Mediterranean coastline gives jihadists a venue for training camps on the border of Europe and free access to target Western ships at sea.

The African country is less than 300 miles away from European mainland.

Security has collapsed in Libya since the revolution in 2011 when Colonel Gaddafi was unseated.

Since the collapse of Gaddafi’s regime, the number of boats trafficked into Europe has risen sharply.

Italy estimates that over 200,000 people could make the crossing from Libya to Sicily.

The video had footage of a militant declaring: “We will conquer Rome, by Allah’s permission.”

The Isil propagandist describes Libya as having ‘immense potential’ for Isil.

He added that the Libya had plenty of weapons from the Libyan civil war.

Support for the group in Libya is growing, since September the town of Derna has been run according to the group’s strict Shariah law.

Last Monday, the former head of the M16, Sir John Sawers, said that Britain should debate whether to put troops on the ground there to stop the country ‘being exploited by fanatics.”

Nasser Kamel, Egypt’s ambassador to London, warned that Britain should brace itself for ‘boats full of terrorists’ unless action was taken in Libya.

In February, there were reports that jihadists hoped to use Libya as a ‘gateway’ to wage war across southern Europe.

Letters written by the group’s supporters revealed that the jihadists hoped to have militants sailing across the Mediterranean posing as migrants.