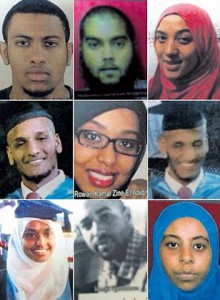 Twelve Sudanese medical students, most carrying Western passports, are believed to have travelled to Turkey with the intention of crossing into Syria to join Daesh militant groups, the university’s dean of students said on Sunday.

If confirmed by authorities, the group would be the second of its kind from Khartoum’s University of Medical Sciences and Technology (UMST), founded by a Sudanese lawmaker, to head to Syria this year.

“Twelve students, nine male and three female, in the faculty of medicine left for Turkey last Friday, most of them on Turkish Airlines, without the knowledge of their families,” Ahmed Babaker, UMST’s dean of students, told reporters.

“The fact that the students travelled to Turkey indicates that they are in the direction of joining extremist groups. And the side that is closest to the Turkish border are areas under the control of Daesh,” he said.

Thousands of foreigners from different countries have joined the ranks of groups like Daesh in Syria and Iraq, many of them crossing through Turkey.

Their journey raises fears of additional foot soldiers or sympathisers carrying out attacks on home soil similar to those launched over the weekend by a suspected extremist in France, and by Daesh-claimed attacks on a mosque in Kuwait and a beach resort in Tunisia.

A spokeswoman from Britain’s Foreign Office in London said: “We can confirm that seven British nationals have travelled to Turkey from Sudan. We are providing consular assistance and are working closely with the Turkish police to establish their whereabouts.”

A spokesman for the British embassy in Khartoum said the embassy was aware that the seven had left on Friday.

Babaker said Turkish authorities had arrested three students at an airport in Turkey, without specifying the airport. He said one of the 12 carried a diplomatic Sudanese passport.

Sudanese officials were not available for immediate comment. Reuters was not able to reach Turkish officials for comment.

In March, a group of medical students who had studied at UMST also travelled to Turkey en route to Syria.