You are here: Home / Africa / #Bring Back Our Girls: One year later, where are the girls kidnapped by Boko Haram? 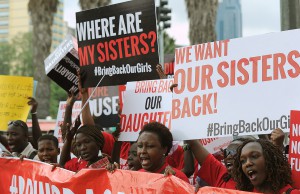 One year ago today, terrorists stormed a boarding school in Nigeria and seized nearly 300 girls, shoving them into trucks at gunpoint and driving off into the night. Dozens managed to flee, but more than 200 remain missing to this day. A global social-media campaign, “Bring Back Our Girls,” has kept the issue alive but has not brought the girls back, wrote AP.

On the anniversary of the kidnapping this week, global activists including Nobel Peace Prize winner Malala Yousafzai, the Pakistani schoolgirl shot in the head by the Taliban, are calling for world leaders to step up. “I was a target of militants who did not want girls to go to school,” she said in an open letter to the kidnapped girls. “Today and every day, we call on the Nigerian authorities and the international community to do more to bring you home.”

The fate of the schoolgirls, kidnapped from the town of Chibok by terrorist group Boko Haram, remains unknown. The militants—who want to create an Islamic state and wipe out Western influences in schools—threatened to sell the girls as slaves, then later claimed to have married them off. A report from the BBC this week said a woman had seen more than 50 of the girls alive three weeks ago. The girls were in Islamic attire, the witness said, being escorted by militants in the northeast.

Obiageli Ezekwesili, a former minister of education in Nigeria and a force behind the social media campaign, said in a phone interview with Women in the World that the Nigerian government didn’t act fast enough in the wake of the abduction. There was a sense among some officials that the kidnapping was “a staged incident to destabilize the government,” she said. “The basic mindset was that there was something unbelievable about the abduction.” She added that “some segments of society” still feel that way. While the government stumbled, she said, the social-media campaign took off. Ezekwesili will discuss the crisis at the Women in the World Summit in New York City later this month.

Recent elections in Nigeria ushered in a new president, Muhammadu Buhari, who has vowed to vanquish Boko Haram and bring the girls home. The militants have waged an increasingly bloody war in recent years, massacring an estimated 7,300 people last year alone, according to a UNICEF report released this week. They have attacked churches, bombed civilians, and slaughtered schoolchildren in their dormitories. More than 1.5 million people have fled their homes due to the violence, including some 800,000 children, according to the report.

Women and girls who have escaped captivity have said that if they refused to convert to Islam, they faced physical abuse, forced labor, forced marriage, and sexual assault, according to a Human Rights Watch report released last fall. “While some of the women and girls seemed to have been taken arbitrarily, the majority appeared to have been targeted for abduction because they were students, Christians, or both,” the report said. Women and girls described being taken while working on farms, fetching water, or attending school. They were held captive in camps believed to be located in the Sambisa Forest in the northeast.

One 15-year-old victim, according to the report, said that when she complained to a Boko Haram leader that she was too young for marriage, he pointed at his 5-year-old daughter and said, “If she got married last year, and is just waiting till puberty for its consummation, how can you at your age be too young to marry?”

Some of the Chibok schoolgirls who managed to escape are now studying at the American University of Nigeria. But for the girls who remain missing, their families wait and hope. As the father of a girl named Amina told The Independent in a report this week, “Every day we look at a photo of Amina and are bitter that we’re alive but can’t do anything to help our daughter. We can’t do anything but hope.”