You are here: Home / Senza categoria / Breitbart news nominated for ‘Islamophobe of the Year’ news site 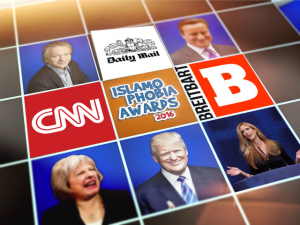 The Iranian-funded Islamic Human Rights Commission has nominated Breitbart News Network as one of the contenders for ‘Islamophobe of the Year’ in their annual display of navel-gazing. Their rationale appears to be Breitbart London’s reporting on the European migrant crisis and radical Islam.

The organisation, which has previously been described as a “Khomeinist group” which has campaigned on behalf of Omar Abdel-Rahman, who was sentenced to life imprisonment for his part in the World Trade Center bombings of 1993.

The group hosts its “awards ceremony” in Wembley, in London, and stated in a press release:

The gala dinner features a satirical awards ceremony where those who have been the most Islamophobic over the past year are awarded for their “accomplishments”. The event aims to subvert Islamophobia through comedy and revue while simultaneously addressing a serious and significant issue in a creative manner.

Following last year’s trend, the awards are split into four separate categories: UK, International, News/Media and Film/Book/TV Series. Nominees were submitted by the general public who had the chance to write in whomever they felt had displayed prominent cases of Islamophobia.

The winner of the British award for Islamophobia in 2014 was Breitbart London’s very own Editor in Chief Raheem Kassam. Now it seems the entire organisation is up for the coveted gong, taking on the Daily Mail, Fox News, the Sun, CNN, Ann Coulter, Cathy Newman, the Daily Caller, Sam Harris, and Sky News for the prize.

Breitbart joins auspicious other nominees too, with U.S. Presidential candidate Donald Trump and Ben Carson both nominated for the U.S. prize, as well as Marine Le Pen, Bill Maher, Geert Wilders, and even Aung San Suu Kyi in the running.

The Islamic group states that Breitbart News has been nominated because Breitbart London “might be slightly obsessed with how awful Muslims (and currently “migrants”) are”.

Raheem Kassam, 2014 award winner and Editor in Chief of Breitbart London said: “It is, once again, a great honour to be in this list of esteemed individuals who fight against radical Islam. These lists – barring some farcical nominees such as CNN – are a who’s who of tackling the spread of extremist Islamism across the Western world. Frankly, I would be disappointed if we didn’t win”.