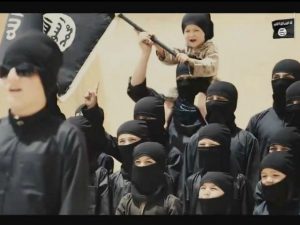 Vian Dakhil, Iraq’s only Yazidi member of parliament, denounced the use of Yazidi children as child soldiers by the Islamic State (IS/ISIS), telling the Iraqi news agency Al Sumaria this week that the victims were “brainwashed” into jihad, like reported by breitbart.com.

The Yazidis are an ethnic and religious minority in Iraq that Islamic State terrorists consider “devil worshippers” because some Christians and Muslims believe that Melek Taus, the “peacock angel” that the Yazidis worship as the ruler of earth, is Lucifer, the fallen angel of the Judeo-Christian Bible. Dakhil contends that abducted Yazidi children are being taught that they are Muslim, not Yazidi, and forced to recite and internalize violent Islamic texts.

“Nearly 120 Ezidi children, aged 10 to 13, are being brainwashed into fighting alongside the IS militants in Syria,” Dakhil told Al Sumaria, according to the Kurdish outlet Kurdistan 24. The children, she said, are being forced to “wear military uniforms and fight within their ranks in Syria.”

Yazidis were the victims of intense persecution and genocide by the Islamic State. Throughout Sinjar, Iraq’s most populous Yazidi enclave, the Islamic State invaded villages and burned them down throughout much of 2014 and 2015. The Islamic State jihadis would typically kill the men in villages and abduct the girls and women to be used as sex slaves. ISIS took an estimated 7,000 Yazidi sex slaves in summer 2014 alone. Dakhil alleges now that many boys were taken from their families as well, and forced to forget their identities and adopt those of Sunni Muslim terrorists.

While hundreds of women and girls abducted by ISIS have since been liberated, the strict social customs of their families have made reintegration into Yazidi society very difficult. Families already traumatized by genocidal attacks have rejected female relatives because they have been defiled by non-Yazidis, in some cases even bearing mixed children with the terrorists.

Dakhil has been one of the most outspoken voices in defense of the Yazidis in the world, and in defense of minorities in Iraq generally. Early this month, Dakhil brought to public attention the murder of a Christian family—a doctor and his wife and mother—in Baghdad, the latest of a string of attacks in the Iraqi capital, which does not currently boast an Islamic State presence. Baghdad is currently controlled by a Shiite governing coalition under Prime Minister Haider al-Abadi, who has welcomed rogue Shiite militias into the fight against ISIS.

The Popular Mobilization Unit (PMU/PMF) militias, now a legal branch of the Iraqi military, recently shut down the hospital in Yazidi stronghold Sinjar, according to Kurdish officials in the region. The PMU have been involved in an extensive campaign to overrun areas run by Iraqi Kurds, who are mostly Muslim but have ancestral ties to the Yazidi community. Some Yazidis identify as ethnically Kurdish and religiously Yazidi, though whether Yazidis are Kurds remains a point of contention.

Adding to fears of another ground invasion of Sinjar, which remains barely hospitable after the 2014 invasion, Turkish President Recep Tayyip Erdogan threatened to invade the region on Tuesday. Erdogan launched an invasion of Afrin, Syria in January, targeting Kurdish fighters in the area. Claiming that Sinjar is home to members of the Kurdistan Workers’ Party (PKK), a U.S.-designated terrorist group, Erdogan said he planned to send troops to Sinjar if the Iraqi military does not attack it.

Dakhil first made international headlines in 2014, when she personally took a helicopter to Mount Sinjar to save persecuted Yazidis. The Islamic State, having overrun Sinjar city, forced the local population to flee up the perilous mountain, where many starved or froze to death. Dakhil suffered a helicopter crash during those rescues.

Last year, Dakhil helped Yazidi sex slavery survivors tell their stories to journalists. In an interview with the Egyptian network Extra News, Dakhil told the story of a woman who was forced to eat the corpse of her one-year-old son while in ISIS captivity.