The 12-year-old boy, who is identified only as ‘Nasir’ was being trained to give his young life as a suicide bomber to Islamic State, who famously boast: “We are the ones who love death as you love life.” 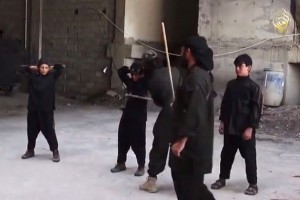 A boy who escaped the clutches of ISIS has spoken of the horrific conditions child soldiers had to endure at the hands of the terror thugs.

The 12-year-old boy, who is identified only as ‘Nasir’ was being trained to give his young life as a suicide bomber to Islamic State, who famously boast: “We are the ones who love death as you love life.”

Nasir told CNN that there were 60 children in the training camp – the youngest was just five – and he was never more scared than when there were airstrikes. “They told us the Americans, the unbelievers, were trying to kill us but they, the fighters, they loved us.

“When they were training us they would tell us our parents were unbelievers and that our first job was to go back to kill them.”

Luckily he has now been reunited with his mother at a refugee camp in Kurdistan.

He added: “We weren’t allowed to cry but I would think about my mother, think about her worrying about me and I’d try and cry quietly. When we escaped and I saw my mother again, it was like coming back to life.”

Aziz Abdullah Hadur, a Peshmerga commander, says that he and his Kurdish fighters must sometimes make an “ unbelievably hard” decision – to gun down kids sent to attack their lines in suicide vests.

ISIS‘ use of child soldiers and brainwashing was laid bare in a recent video featuring a young boy with an English accent.

Khadijah Dare – the 24-year-old woman from south east London who fled Britain in 2014 and this week allowed her four-year-old Isa to appear in the same sickening video for ISIS.

They both attended a mosque in Lewisham, south east London, that was being targeted by the Al-Muhajiroun.

Dare has become a poster girl for IS after she divorced her first husband and fled to Syria with her son to marry a Swedish jihadi and have another child.

Her former partner Deniz Yoncaci, 26, has so far refused to comment on his ex wife’s decision to take his son to the war torn state.

Dare’s mother and father have publicly pleaded for their daughter to return to Britain with her children insisting they are being used by Islamic State as “propaganda” tools.