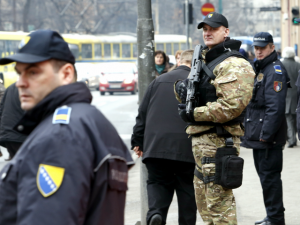 Bosnian police have detained two migrants from Syria and Algeria and found hidden weapons during a raid in the capital Sarajevo, the police said on Monday according to reuters.com.

The two men will be handed over to Sarajevo prosecutors later on Monday, she added.

About 15,000 refugees and migrants from Asia and North Africa have passed through the Balkan country this year on their way to Europe’s wealthier countries. Several thousand are stuck in Bosnia after neighboring Croatia tightened its borders.