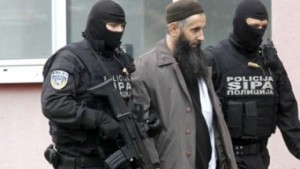 A Bosnian Muslim cleric was jailed for seven years on Wednesday for recruiting fighters for Islamic State in Syria and Iraq, under a new law aimed at stopping people joining militants in the Middle East.

Husein Bosnic, known as an unofficial leader of the ultra-conservative Salafi movement in Bosnia, was arrested last year and was among 17 others on trial in Bosnia for suspected links with militant groups in Syria and Iraq.

“Defendant Husein Bosnic is guilty of…consciously, during 2013-14 from the position of religious authority, publicly inciting, recruiting and organising a terrorist group,” the chairman of the court council, Amela Huskic, said.

Although most Bosnian Muslims, known as Bosniaks, are moderate, some have embraced Salafism under the influence of foreign fighters who came to Bosnia during its 1992-95 war to help Muslims fight against Orthodox Serbs and Catholic Croats.

Last month, in the first verdict under the new law, Bosnia’s state court convicted four other people for financing terrorist activities and recruiting Bosnians to fight in Syria and sentenced them to up to 3-1/2 years in prison.

Police estimate about 200 Bosnians, including women and children, have left to join fighters in Syria’s civil war over the past three years, of whom more than 50 have returned and about 30 have been killed.