You are here: Home / Mediterranean / Border Control: Tunisia attempts to stop terrorism with a wall 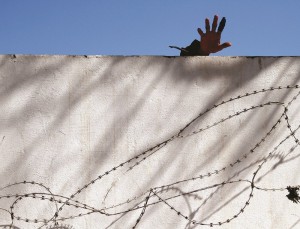 It took a painfully long time to get to the world’s third-largest desert. The astonishingly slow-moving train from Tunis was halted by rail complications. Stranded on the side of the highway, I hitched a ride with some sympathetic offduty cops who drove me to the nearest city. From there, it was several crowded hours in a taxi collectif to Ben Gardane, a town that felt like a lightly restrained version of the Wild West.

Tunisia’s border with Libya starts 12 miles from here, at the Ras Ajdir checkpoint, and continues for nearly 300 miles, a land of sprawling flats and dunes uncontrolled by the central government. A sophisticated network of illicit exchange operates seamlessly between the people on either side, for whom the desert is a mere extension of their backyard.

It’s across this border that weapons are smuggled into the country. It’s here that terrorists such as Seifeddine Rezgui, who killed 39 tourists in June, allegedly cross to wage jihad. And it’s here that the Tunisian government is building a wall to try to stop them.

“There is a real monster of terrorism in Tunisia,” Mazen Cherif, a security analyst at the Tunisian Center for Global Security Studies, told me. The first high-profile attack, reportedly orchestrated by Tunisian terrorist cell Ansar al-Sharia, struck the US embassy in 2012.

In March 2015, gunmen stormed the Bardo National Museum in Tunis, killing 23. A few months later, Rezgui, wielding a poorly hidden Kalashnikov in a beach parasol, shot up a resort in Sousse. Both attacks this year targeted foreigners. According to police, the men involved in the 2015 massacres were trained in Libya and used arms smuggled across the porous border. Following the Sousse attack, the government announced it would build a barrier with Libya to combat terrorism and stem the flow of contraband.

The first portion of the wall will stretch 140 miles south from Ras Ajdir to the Dahiba border crossing in Tataouine. The government is working with nine national companies and the army to build the first section, a line of sandbags protecting a moat six and a half feet deep; construction began in July. A second phase, comprising an electronic sensor system, will start next year. Observation towers and drones will bolster the entire wall.

According to Habib Essid, the Tunisian prime minister, Libya is Tunisia’s “biggest dilemma.” Following a civil war, the overthrow of Muammar Qaddafi, and a series of NATO-led air strikes, Libya descended into anarchic chaos that has created a successful microclimate for terrorist groups to flourish and for arms from the old regime to be trafficked.

But Tunisia’s security problems are arguably equally internal. “It’s easier to say that [terrorism] is coming from Libya than to say we have problems inside,” said Abdel Karim Kebiri, former senior adviser for the United Nations International Labor Organization.

Tunisians, like many around the globe, began to see modern jihad as a means to achieve political and religious goals in the 1980s, prompted by opposition to the Soviet occupation of Afghanistan. It was there that Tunisian terrorist Seifallah Ben Hussein (nom de guerre Abou Iyadh) cut his teeth; he would go on to become one of the top lieutenants in al Qaeda.

Since 2011, more than 7,000 Tunisians have left the country to join the Islamic State in Iraq, Libya, and Syria. Terrorist cells have popped up in the country’s interior—16 have been uncovered by the Tunisian police since March. Two hundred Islamic State–affiliated military combatants operate in the Mount Chaambi region, where checkpoints have been routinely attacked with IEDs and arms are smuggled in.

Then there’s the rampant corruption that has plagued the country’s already weak security apparatus. In mid September, 110 members across law enforcement were dismissed on smuggling and terrorism charges. Corruption in the country, at both the security and governmental level, has actually increased since the 2011 revolution.

How can one wall fix all this?

The majority of products smuggled from Libya into Tunisia are disappointingly banal: hair masks, plastic bikes, potatoes grown in Egypt, sneakers made in China, polyester blankets. Largely ignored by the government in Tunis, southern Tunisia is plagued by high unemployment and underdevelopment; many in Ben Gardane support themselves by smuggling or selling such products. People from across the country know to come here to buy discounted goods in the open-air market Souq Libya.

Since the revolution, they also know they can come here to buy weapons. AK-47s and rocket launchers are brought into Tunisia under the cover of night, far from patrolled checkpoints. A smuggler drives a Land Cruiser (the apparent vehicle of choice and an intriguing sponsorship opportunity for Toyota) across the desert. Outfitted with Tunisian license plates, it’s packed with food products, a decoy in case of a random police stop.

At the border, a plateless second car carrying weapons waits, headlights turned off. The drivers switch vehicles and drive back into their respective countries. Most cars aren’t tracked, and drivers who are stopped, locals told me, can resort to bribery.

The arms trade has increased tenfold since the 2011 ouster of Tunisian dictator Ben Ali. Though goods started crossing the Sahara in 1987, following normalized relations between Ben Ali and Qaddafi, illicit trade was tightly controlled by Ben Ali’s in-laws, who were known to enjoy a lavish lifestyle subsidized through largely illegal means. “A fly could not cross the border,” Kebiri told me with a laugh.

Most security experts and residents of Ben Gardane agree that the wall will decrease the amount of goods crossing into Tunisia. For citizens living on the border, that’s not good news. As I walked around the town, eyes narrowed at me from under baseball caps, arms were crossed, and answers were terse. People were tired, suspicious, and frustrated. One young shopkeeper, tipped back in a desk chair, looked at the wall as he told me that “the decision to build this wall will not only be catastrophic, it will literally kill the economy in the region… The young people here have no hope, no future, no education, no social leverage, which narrows down their aspirations and leaves the souq as their only source of living.”

It’s plausible that the wall could affect the number of arms smuggled across the border (official statistics are not available), although, after four years of weakly guarded borders, many weapons are already stockpiled across the country. What’s harder to prove is whether the wall will reduce terrorist attacks.

Ahmed Ounaies, the former foreign minister under Habib Bourguiba and then Ben Ali, told me that “the wall will be effective… This idea came to us later, but it originated from a vaster, solid system.” Citizens back in Tunis are equally optimistic. “It’s a logical solution,” a middle-aged cab driver said. Out of everyone I spoke with in Ben Gardane, though, it was only Beshir, a retired shopkeeper, who told me brightly that “the wall will be very efficient and there will be no more terrorists.”

Other residents were incredulous, although reluctant to comment much on the terror implications of the wall. They told me that most terrorists already cross the border down south, far from the wall. Besides, Karim Mezran, a Tunisia and Libya analyst at the Atlantic Council, a Washington-based think tank, said, “Terrorists tend to fly first-class into the country where they want to be.”

The wall could conceivably shield Tunisia from the violence that has engulfed Libya, but as a defense mechanism, it seems to be more of a Band-Aid solution. As a young university student in Ben Gardane said nervously, “Terrorism is bigger than the Tunisian police. These people have weapons we can’t even dream of. Anyway,” he added ominously, hands clasped in his lap, “the ideology itself is bigger than the wall they are trying to build.”

Security analyst Cherif agrees. “The problem is in Tunisia. If we make a barrier between Algeria and Libya, there are still terror cells in Tunisia [with terrorists] who have agreed to die for their mission. They are ready to die for God.”

Since the 2011 revolution, Tunisia’s economy has taken a hit. The 2015 attacks sent tourism plummeting in the country, and its GDP subsequently dropped. The economy is now in a technical recession. And yet, Tunisia has gone ahead with plans to build a wall, whose efficacy is not guaranteed, for more than $81 million.

National funding will be used to cover the first $5 million, a significant contribution for a recessive economy. Sources told me that the government is attempting to secure funding for the remainder of the wall and the electrical fence from European countries, particularly Germany (the German embassy in Tunisia did not respond to press inquiries). French defense contractor Thales Group is rumored to be working with the Tunisian government, though the company declined to comment on its involvement.

The EU itself is not financially supporting the project, however. Samia Boulares, press representative for the EU Delegation to Tunisia, emphatically denied any EU funding, saying it was strictly an internal project.

European countries certainly have a vested interest in containing Tunisia’s terrorist problem, which could trickle across the Mediterranean. But several security experts pointed out that an in-depth inquiry was not put in place before making the decision to build the wall. “It’s not a scientific strategy,” Cherif said. “It’s the easiest thing to do in terms of material.”

“It’s just a symbolic gesture [that] doesn’t mean anything,” Mezran added. “The government is trying to show to the people and to the international community that they are doing something.”

Tangible barriers might inspire confidence in some citizens and placate the European community, but a wall can only be part of a comprehensive strategy that addresses the root issues of terrorism, overhauls the country’s weak and corrupt security apparatus, and critically allocates funds.

After all, as Cherif said with a sigh, “What can you do with a wall?” He paused. “A wall is nothing.”