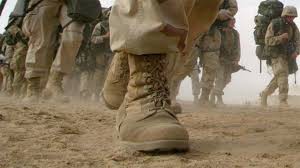 Faiez Serraj, the PM of the Libyan Government of National Accord, asked the US Africa Command to increase its military assistance during talks in Stuttgart with AFRICOM commander Thomas Waldhauser, and US special envoy for Libya, Jonathan Winer.

Libya’s unity government has asked Washington, which is backing an air campaign against ISIS in Sirte, to step up its military assistance, the US Africa Command said Thursday. An AFRICOM statement said in part:“Discussions were held on …the GNA’s desire for US assistance with future enhanced military capabilities and defence capacity building. Waldhauser and Winer reiterated their support for GNA efforts and throughout the visit, the three discussed strategic options for Libya’s future once Sirte is liberated. “

An AFRICOM Facebook post said the purpose of the meeting was to review the US government support for the GNA and also to discuss future collaboration between the US and the GNA in order to promote Libyan stability and security. Serraj had with him General Abdul-Rahman Al-Taweed who chairs the GNA’s Temporary Security Committee and also Taher El-Sonni an adviser to the PM.

The GNA requested close air support to aid BAM forces in their fight against the IS. This appears to be already being provided. They also discussed strategic options for Libya’s future once Sirte is totally captured. An AFRICOM statement said:“Discussions were held on our partnership in countering terrorism, the GNA’s desire for U.S. assistance with future enhanced military capabilities and defense capacity building, to include a desire for greater and more open military-to-military training and information sharing.”

The Al-Bunyan Al-Marsoos forces (Solid Structure, or BAM), mostly brigades from Misrata, and loyal to the GNA, began an offensive in mid-May to expel the Islamic State (IS) from Sirte and the surrounding areas. After rapid advances at first, the offensive slowed once the battle was inside the city of Sirte as the IS put up a fierce resistance causing serious losses among the BAM forces. The IS had controlled the city since June of 2015.

As of August the 1st, US bombing has aided the offensive carrying out many attacks and recently using an advanced helicopter gunship as well. There are reports that the U.S. may also have carried out an attack in the area of Bani Walid to the south-east of Tripoli. Small numbers of special forces from several countries including the US and UK have also helped out the BAM forces.

The GNA recently received a setback when the House of Representatives(HoR) defeated a vote of confidence in the GNA. According to the Libya Political Agreement (LPA), the vote of confidence is required before the GNA is activated and the HoR becomes the legislature of the GNA. However so far the HoR and its armed forces commander Khalifa Haftar have refused to accept the GNA. The GNA may be attempting to gain more military support in the hope this will make it appear stronger.

Spokesperson for the Libyan National Army (LNA) of Khalifa Haftar, Ahmed Al-Mismari said at a news conference that cities and towns under control of the GNA militias must be attacked since the HoR has rejected the Serraj government and all of its resolutions and decisions: “Any institution or city under Sirraj militias would be regarded illegal and must be attacked. The formation of Presidential Guard, foreign intervention and Sirte battle are all illegal.”

In May, the LPA Chief of Staff Abdul Raziq Nadouri threatened to attack Tripoli and liberate it from what he calls militias. The militia associated with the GNA are almost all targets of Haftar’s Operation Dignity which began back in May of 2014 but is still ongoing. Operation Dignity is intended to rid Libya of Islamists whom Haftar regards as opponents. If actual clashes break out between Haftar’s forces and those loyal to the GNA, the U.S. would be in the unenviable situation of having to choose sides. The GNA obviously hopes to gain support from the US in such a scenario.