You are here: Home / MidEastGulf / Boots on the ground: 160 US troops arrive in Iraq’s Habbaniyah air base 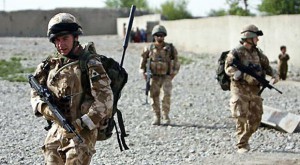 Nearly 160 US soldiers arrived from Kuwait aboard to the Habbaniyah air base, east of Ramadi western Iraq, yesterday to participate in the operation to recapture the city from Daesh.

An Iraqi military official told Al-Arabi Al-Jadeed news site: “The new forces’ mission does not appear to be training the Iraqi army or the tribes fighting with me. We expect that they will provide direct support in the upcoming battle to retake Ramadi.”

The US forces’ arrival in Habbaniyah comes after Shia popular crowd militias withdrew from the base under US pressure.

A member of the Anbar Provincial Council told the news site: “The Americans do not want the Islamic State militants or the popular crowd militias to stay in the area.”

Meanwhile, a leader of one of Anbar’s clans which is fighting the Islamic State, Mahmoud Hussein Al-Alwani said: “The American fighting force’s arrival to Anbar gives a major military momentum to combat troops, because this force is armed better and has better experience fighting battles in cities.”

According to Al-Alwani, the “popular crowd’s presence in the province over the past months has hampered liberating it and delayed international aid, especially American aid.”

During his visit Al-Obeidi called to “intensify logistical support for troops fighting in the province.”

The international coalition has carried out 22 airstrikes on Daesh’s positions in the cities of Ramadi and Heit in the Anbar province and other areas, a statement by the Central Command of US forces said.

According to the statement, the airstrikes destroyed heavy weapons warehouses, vehicles and platforms used to launch air defence missiles.