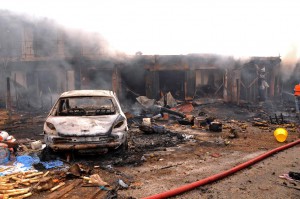 Haruna Bukar, a witness to the blast, said the local militia was patrolling the area when they discovered the camp and found the bag of metal objects, which they carried to the nearby town of Monguno.

As residents gathered around to examine the bag, it exploded, said Bukar.

Scores of people have been killed this month in suicide and other bombings carried out by Nigeria’s homegrown extremists using these kinds of improvised explosive devices.

Boko Haram took control of a large swath of northeast Nigeria until a multinational force this year forced them out of towns and villages. Nigeria’s military says the extremists are now confined to the Sambisa Forest.

Boko Haram denies this and has stepped up bombings and hit-and-run attacks since President Muhammadu Buhari announced at his May 29 inauguration that the command control center for the war against the insurgents is moving to Maiduguri, the biggest city in northeast Nigeria and the birthplace of Boko Haram.

The 6-year-old Islamic uprising is blamed for the deaths of some 13,000 people. More than 1.5 million have been driven from their homes, some across borders.