You are here: Home / Africa / Bombs at mosque, restaurant in Nigerian city kill 15 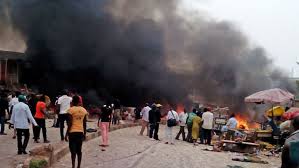 Two bombs have exploded at a crowded mosque and an elite Muslim restaurant in Nigeria’s central city of Jos, killing at least 15 people.

There was no immediate official word on the Sunday night blasts.

Witnesses who requested anonymity for fear of reprisals say the explosion at Yantaya Mosque came as a leading cleric who preaches peaceful co-existence was addressing a crowd during the holy month of Ramadan. The witnesses say they don’t know how many worshippers died.

Another bomb exploded at Shagalinku, a restaurant patronised by elite politicians. Mark Lipdo of the Christian Stefanos Foundation says at least 15 people died there.

Jos has been targeted in the past by bomb blasts claimed by Boko Haram Islamic extremists that have killed hundreds of people.