You are here: Home / Europe / Bomb Syria or talk to Assad? Merkel and Hollande disagree 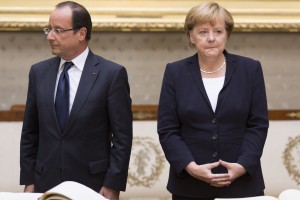 Germany’s Angela Merkel believes it’s time to talk with Syrian President Bashar al-Assad to seek a solution to the war pushing hundreds of thousands of refugees towards Europe, but France’s François Hollande is preparing to launch air strikes in Syria to stop the spread of Islamic State.

Berlin and Paris’ contradictory approaches to the war in Syria were on display at the EU summit on migration in Brussels when — in separate news conferences in the early hours of Thursday — the two leaders gave different answers to questions about Damascus.

“There has to be a conversation with many different actors, among them Assad and others — not just the United States of America and Russia, but also regional important partners like Iran, and Sunni countries like, for instance, Saudi Arabia,” said Merkel.

“Bashar al-Assad cannot be involved in the future of Syria. The transition would not be successful unless he leaves,” said President Hollande, who announced the week before last that France was preparing for air strikes in Syria. Last week, the French defense minister said the attacks would come in a matter of weeks.

In a potential sign of concern about the mixed messages, French Foreign Minister Laurent Fabius convened an urgent meeting with his German and British counterparts for Thursday evening in Paris, together with EU foreign policy chief Federica Mogherini. Although the agenda was not formally announced, it was likely to include talks on Syria.

Hollande’s government has been one of the fiercest western critics of the Assad regime, dating back to its advocacy of coalition air strikes against Damascus following the revelation it had used chemical weapons against civilian populations in 2013.

Foreign minister Fabius has frequently blamed Assad for helping to create the Islamic State by freeing hundreds of Islamist terrorists from Syrian jails at the outset of a popular uprising in 2011.

In March he strongly opposed the idea, floated by U.S. Secretary of State John Kerry, of starting negotiations with the Assad regime, saying that any outreach would encourage more Syrians to join the ranks of the Islamic State.

In 2011, Merkel had issued a joint statement with the French and British leaders calling on Assad to resign and accusing him of “resorting to brutal military force against his own people,” thereby losing any legitimacy to govern the country.

Merkel said late last month she would welcome the participation of Iran, one of Assad’s few remaining powerful allies, in talks to end the civil war there.

For former German deputy foreign minister Jürgen Chrobog, however, the real key to peace in Syria is Russia.

“The West has realized that there is no way around Russia in this issue,” he told German radio. “Russia is needed in a fight against the Islamic State.”