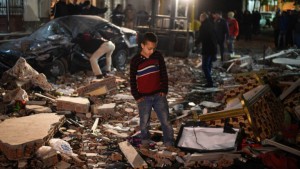 At least nine people, including six policemen, were killed on Thursday in a Cairo suburb during a raid on an apartment, amid a reinforcement of security for next week’s anniversary of the 2011 Arab Spring uprising.

The officers were killed when a makeshift bomb went off as they prepared to launch an assault on a militant hideout, security sources said.

The Interior Ministry said in a statement that its men had arrived in their vehicles to the apartment and found the building booby-trapped. The device went off when they tried to defuse it.

The explosion in the capital’s Al-Haram district, near the pyramids, wounded 15 others, according to the AFP news agency.

The deadly incident came a few days before the fifth anniversary of the popular revolt that ousted long-time Egyptian leader Hosni Mubarak.

However, Morsi himself was driven from power in July 2013 by then army chief and now President Abdel Fattah al-Sisi.

The neighbourhood of Al-Haram, where Thursday’s deadly explosion occurred, has witnessed several attacks and gunfights since Morsi’s overthrow.

Al-Haram is known to house many sympathisers of Morsi and used to be a regular venue for clashes between his supporters and security forces in the aftermath of the 2013 ouster.

The district also houses several hotels used by tourists visiting Cairo because of its proximity to the pyramids.

The Cairo bombing comes after gunmen killed five policemen late Wednesday when they attacked a checkpoint in the North Sinai town of El-Arish.

Jihadists say their attacks are in retaliation for a brutal government crackdown targeting Morsi’s supporters that has left hundreds dead and thousands imprisoned.

Sisi has warned against any form of demonstration on the anniversary of the Egyptian revolution on Monday.