You are here: Home / Africa / Bomb in northern Nigeria kills at least 7 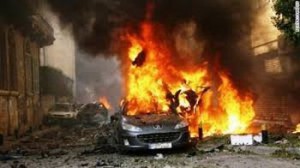 A bomb blast in Damaturu, the capital of northern Nigeria’s Yobe State, killed at least 7 people aturday, a Reuters witness at a nearby hospital said.

The bomb exploded at a busy market near a bus station.

At least 27 people were wounded, many critically, and ambulances continued to bring in the injured.

There was no immediate claim of responsibility for the blast, but it bore the hallmark of Islamist militant group Boko Haram, which has been fighting a six-year insurgency in a bid to establish an Islamic state in northern Nigeria.

Boko Haram took over a territory larger than Belgium last year, killing thousands of people and displacing some 1.5 million. The militants took over most of Borno state and parts of Adamawa and Yobe.

The Nigerian army has gone on the offensive recently and says Boko Haram has now been pushed into the vast Sambisa forest in eastern Borno state.