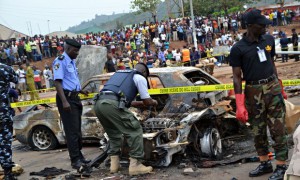 Two explosions ripped through a bustling market in northeast Nigeria’s Madagali town Friday morning, and a survivor says they killed at least 10 people.

Boko Haram fighters are blamed for the attack on the edge of the Islamic extremist group’s Sambisa Forest stronghold, which Nigeria’s military has been bombing ahead of ground assaults. Since the military has dislodged the extremists from towns and villages this year, the insurgents have been attacking soft targets.

Madagali was liberated last year after months in the hands of Boko Haram. It is 150 kilometers (95 miles) southeast of the biggest northeastern city, Maiduguri.

Friday’s blasts struck simultaneously at opposite ends of the market selling grains and vegetables, according to Ahmadu Gulak, a driver who was buying tea there. He told The Associated Press he counted at least 10 bodies and dozens of wounded being ferried to a nearby hospital.

Police spokesman Othman Abubakar confirmed the blasts but said rescuers were still working and it was too early to give a toll. He said it was unclear if the attacks came from suicide bombers or planted explosives.

A bus station near the same market was targeted by two women suicide bombers who killed at least 30 people in December 2015. In June, Boko Haram extremists opened fire on mourners at a funeral in Madagali, killing 18 people.

The attacks continue despite government and military assertions that the insurgents are on the run. President Muhammadu Buhari had declared the extremist group was “technically defeated” in December 2015. Last week, a year later, he said a multinational force from Nigeria and neighboring states is readying to “move simultaneously and spontaneously for us to see the end of Boko Haram.”

Buhari said the insurgents “are done for” in the Lake Chad Basin bordering Nigeria, Chad and Niger. But the United Nations says more than 1 million people are believed trapped there by ongoing fighting without food or medical help.

Boko Haram’s seven-year uprising has killed more than 20,000 people, forced 2.6 million from their homes and created a massive humanitarian crisis.