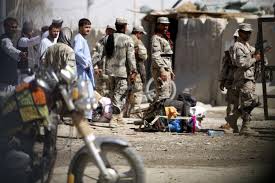 An explosion in the Kandahar province in southern Afghanistan, close to the border with Pakistan, killed 13 civilians on Friday, a security source said.

“This morning, a bomb exploded on Tunas vehicle in the Loy Karez area of Spin Buldak district, killed 13 civilians, including women and children,” the source said.

Earlier this week, a car bomb exploded near the Balkh district of northern Balkh province of the country killing at least one soldier and injuring six others.

No group has claimed responsibility for the blast

Last week, the Independent Human Rights Commission in Kandahar condemned recent explosions, which caused civilian casualties, and called on all parties to the intra-Afghan conflict to protect civilian lives.