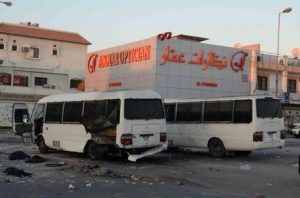 Four Bahraini policemen were wounded in a bomb attack on Sunday near a village south of the capital Manama, like reported by thenational.ae.

“Terrorist blast in police bus near Jua village. 4 policemen injured and they are in a stable condition. Necessary steps are being taken,” the ministry said on its Twitter account.

It gave no further details.

On January 1, gunmen attacked the prison near the village, killing a policeman and allowing 10 inmates to escape. The prison held Shiites convicted over anti-government protests in 2011.

Bahrain has witnessed unrest since a crackdown on the protests, mainly by members of the island’s Shiite majority, to demand a constitutional monarchy and an elected prime minister.

Hundreds of Shiites have been arrested and many have faced trial over their role in the demonstrations.

One of those on trial is Sheikh Issa Qassem, the spiritual leader of the country’s Shiites.

He was stripped of his citizenship last year for “serving foreign interests” – a reference to Shiite Iran.

On Sunday, clashes broke out between security forces and protesters in several Shiite villages as a new hearing in Qassem’s case was under way, witnesses said.