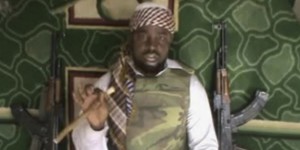 Nigeria’s military said on Friday it had recaptured villages and rescued 90 people in a process that involved the “continuous elimination” of the group from Nigerian territory.

“They have lied about us saying that they retaken our territories, taken weapons and driven us away,” the group said in the recording posted online.

“They are actually the ones whom we have driven away. They are all liars.”

Reuters could not independently verify the authenticity of the audio message. The Twitter feed of jihad monitoring site Site Intelligence said the Hausa language audio message was released by Shekau on Saturday.

Boko Haram has been fighting for six years to set up a state adhering to strict Islamic laws and at the start of 2015 controlled vast swathes of territory across three states in northeast Nigeria.

Nigeria’s army, aided by troops from Chad, Niger and Cameroon, said it pushed Boko Haram out of most of the territory earlier this year.

Suspected members of Boko Haram have killed around 800 people in Nigeria in a spate of bombings and shootings since President Muhammadu Buhari was inaugurated as president on May 29, according to a Reuters tally.

In the recording, Shekau also made references to Buhari’s visits to United States President, Barack Obama and French President Francois Hollande in July and September respectively.