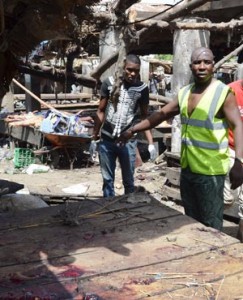 A bomb at a market in the town of Jimeta, northeastern Nigeria, has killed around 30 people, eyewitnesses told Reuters on Thursday.

The device, which an eyewitness said was planted in a three-wheeled motorized scooter inside the market in Adamawa state, was detonated around 19:00, a few minutes after a female suicide killed two people at a checkpoint in Maiduguri.

“We have evacuated 32 bodies, we are taking them to two hospitals,” a Red Cross ambulance driver, who wanted to remain unnamed, told Reuters on the telephone.

Nobody has claimed responsibility but the attacks bore the hallmarks of Boko Haram, the militant Islamist group that has waged a six-year insurgency in the northeast of Africa’s biggest economy and top oil exporter in a bid to set up an Islamic state.

The bombing is the latest attack in a series of explosions in the last few days that has killed around 80 people, following the inauguration of new President Muhammadu Buhari last week.

At the start of the year Boko Haram controlled a swathe of territory around the size of Belgium, but the military says the group has been pushed back to the Sambisa forest in recent weeks, a claim which the group denied in a video aired on social media on Tuesday.

Buhari, who visited his counterparts in Niger and Chad on Wednesday and Thursday to discuss the group, has vowed to defeat the militant Islamists.