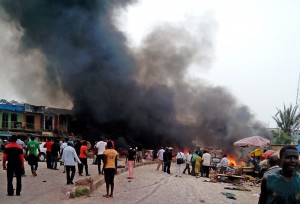 With his finger on the trigger, ready to fire his weapon in an instant, a policeman keeps an eye on people passing in the centre of Maroua, capital of Cameroon’s Far North region that has been a target of Boko Haram Islamists.

It’s been more than a year since a string of suicide bombings by the jihadists — from their stronghold in nearby Borno state in northern Nigeria — tore through a bustling central market and a bar last July, killing 33 people and wounding dozens more.

Security has been beefed up and there have been fewer attacks, but the people of Maroua still live in constant fear of another surprise explosion in their midst.

It was in the popular neighbourhood of “pont vert” (green bridge) that a young girl last July 25 blew herself up — Boko Haram increasingly uses female suicide bombers.

In this busy marketplace where vendors sell the local beer “bil-bil”, snacks and medicinal products, no one has forgotten that day.

He himself was hit by shrapnel during the attack.

“There is still metal in my body,” he says.

Next to him an elderly man Siddi Founaboui lifts his shirt to show two scars from wounds on his stomach. “I can’t stand up for long… Before, I did masonry work, but I can’t do it any more.”

On Mondays there’s a livestock market in Maroua, and police from a special rapid reaction force are stationed at the two entrances to the marketplace.

“We are here to secure the area,” says one of them asking not to be named.

“Move on,” he says suddenly to a group of shepherds chatting near an entrance. “We watch to see that no crowds gather outside the market,” he says.

Boko Haram, who want to establish a caliphate in northern Nigeria, have been waging an insurgency since 2009. Their battle has spilled across the borders of neighbouring countries which, including Cameroon, have formed a regional force to fight back.

One resident Kidmo Dobe sports a T-shirt which says: “Homage to the victims of the ‘pont-vert’ attack, 25 July 2015.”

IHS Jane’s Terrorism and Insurgency Centre (JTIC) says Boko Haram carried out 22 attacks into Cameroon, Chad and Niger in 2014 and 62 in 2015, when it aligned with the Islamic State group.

There were 41 cross-border attacks this year through the end of August. To combat the jihadists the Multi-National Joint Task Force of Nigeria, Cameroon, Chad, Niger and Benin, has launched operations in the Lake Chad region.

When night falls in Maroua, police tell the street vendors and shops to close. Even those who like late night partying are rarely out after 11:00 pm.

At Barmare, one of two places hit by suicide bombers on July 22 last year, Moustapha Sali survived the attack but lost his right eye and his left hand is partially paralysed.

The day of the explosion the father of seven was sitting under a tree where traces of the blast can still be seen.

“I’m afraid of another attack. It’s not easy to forget what happened,” says the former carpenter, who spent four months in hospital.

“The attack completely changed my life. Before I did everything. Now I don’t do anything.”