You are here: Home / Africa / Boko Haram: US to lift Military assistance restrictions on Nigeria 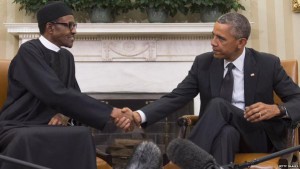 The Leahy Law prohibits the U.S. Department of State and Department of Defence from providing military assistance to foreign military units that allegedly violates human rights with impunity.

Mr. Issah dropped the hint while fielding questions from journalists shortly after meeting with Nigeria’s service chiefs and Ministry of Defence officials in Abuja on Monday.

He said the development was occasioned by the policy of the new military command with regards to the ongoing military operations in the country.

“There were a number of things that were discussed at the meeting but basically the need for additional technical support including overhead surveillance. This was discussed because it is important in the fight against Boko Haram.

“This is because of the trust in the new regime which has begun the process of ensuring that the military’s professionalism in the battle field is made in a way that we all can be confident that the rule of law is followed.

“Following this development, we have begun the process of lifting restriction under the Leahy Law but the vast majority of the support U.S. provides will be given regardless of the restrictions,’’ said Mr. Issah, who led a delegation from the U.S. congress judicial committee to the meeting with Nigeria’s top ranking defence officials.

Mr. Issah said the U.S. will provide other forms of support that would not only boost the military’s capabilities but would also create the environment to rebuild devastated communities.

He said the U.S. through its agencies in Nigeria would help rebuild and rehabilitate communities and victims of insurgency in the northeast.

“We are looking forward to working with the president and the military to rebuild the confidence of the people of Nigeria in the professionalism of the military.

“To make the military something that the people will rely on as the nation tries to clear insurgents and protect the civilians; that is important to the new president of Nigeria, our president and it is also important to the congress.

“But we are looking forward to a great difference in the relationship, a proactive relationship and one in which we can provide a greater level of support,’’ he said.

On his part, the Permanent Secretary, Ministry of Defence, Ismaila Aliyu, said the visit was a sign of the renewed confidence in Nigeria’s military on the global scene.

He said Nigeria now enjoyed a greater level of confidence and trust in the international community, stressing that it would impact positively on the nation’s efforts in repositioning its economy.

“The U.S. believes in Nigeria, they have trust and confidence in Nigeria that is why they are here.

“On the issue of human rights, the U.S. is pleased with what we have been doing in recent times to address the gaps that may have existed in the past.

“This visit is a follow up to Mr President’s visit to the U.S., we have said it and will continue to state that the visit was of great benefit to Nigeria, it has rekindled confidence in the relations between the two countries,’’ he said.

Other issues that dominated discussions between officials of the two countries include justice reforms and support for devastated communities, among others.

The meeting is believed to be one of the gains of President Muhammadu Buhari’s recent visit to the U.S.