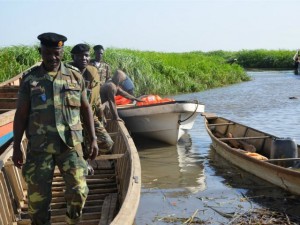 Activities by Boko Haram in the Lake Chad basin and counter-insurgency operations have displaced more than 2.5 million people in Nigeria, Cameroon, Chad and Niger, a UN spokesman said here Monday.

At the same time, about 1,100 schools were destroyed this year by Boko Haram in the Lake Chad region, UN spokesman Stephane Dujarric told reporters, citing Toby Lanzer, the UN regional humanitarian coordinator for the Sahel region.

Sahel is a region where 25 million people are food insecure, 5 million of them severely food insecure, Lanzer said, adding that about 700,000 children every year will lose their lives because of malnutrition.

Boko Haram members have destroyed an estimated 1,100 schools this year in their stronghold region surrounding Lake Chad, he said.

The targeted schools were in Cameroon, Chad, Niger and Nigeria, the four countries most affected by the armed uprising, said Lanzer, who became UN envoy to central Africa’s restive Sahel region in July.

Boko Haram has been blamed for scores of attacks on schools and universities in an insurgency that has killed at least 17,000 people since 2009.

The armed group made international headlines in April 2014 when its members kidnapped 276 schoolgirls from a school in Chibok, a town in Borno State, Nigeria. Fifty-three of the school girls escaped but the rest remained missing.

The violence has hit women and children particularly hard as they are being abducted, raped and trafficked, forced to work as lookouts and used as suicide bombers, according to the UN humanitarian relief agency, known as the OCHA.