You are here: Home / Africa / Boko Haram to use guerrilla tactics after losing Nigerian land 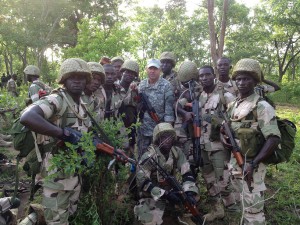 Boko Haram may revert to its strategy of suicide bombings and guerrilla warfare in Nigeria after regional forces recaptured territory from the militants, according to a former captive and analysts.

Since the beginning of April, Nigeria’s military, aided by Chad and Niger, has freed hundreds of people kidnapped by the Islamist insurgents, killing Boko Haram fighters and seizing their weapons. The campaign, aided by troops from neighboring Chad and Niger, has weakened the group, which at one point held control over an area the size of Belgium.

Falmata Kalla, a 31-year-old housewife who was abducted from the northeastern town of Doron Baga and held captive by Boko Haram for eight months, said women and children as young as 12 years old were undergoing training to be used as bombers.

“They are planning heavy suicide bombing attacks in and around the Lake Chad areas and beyond,” Kalla said by phone from Maiduguri, the capital of the northeastern state of Borno, where she fled to last month.

Key to strengthening stability in the region will be reducing poverty and joblessness that may have helped nurture the rebellion. Northeastern Nigeria is the only region of Africa’s most populous nation where people are getting poorer, with more than half of the population in the area living on about $1.40 a day, the World Bank said last year.

For Muhammadu Buhari, the incoming president, raising spending won’t be easy for the government of Nigeria after the price of crude oil, which finances about 70 percent of government spending, plunged 40 percent in the past year. The West African nation’s currency has dropped 16 percent against the dollar in the past six months.

“We need a Marshall Plan for the northeast,” Ben Murray-Bruce, an incoming lawmaker who won a seat in Nigeria’s Senate in March 28 elections, said by phone, referring to the U.S. aid program that helped rebuild Europe after the Second World War. “There’s an incredible amount of youth unemployment and youth restiveness. The only way to solve it is through economic development.”

Boko Haram took charge of towns and raising its black flag over territory in Africa’s largest oil producer since last year. That marked a change in tactics in a six-year campaign to impose its version of Islamic law that had previously consisted mainly of attacking communities and then retreating to rural hideouts.

The group “remains a guerrilla-based terrorist organization, rooted in improvised explosive device bombings and raids on rural villages,” Drum Cussac, a Poole, U.K.-based security consultancy, said in a May 6 report. “This may be the strategy it reemerges with in 2015. As such, one-off bombings in northeast cities and towns remain a possibility.”

Among some of its attacks last year, Boko Haram bombed a shopping center in the capital, Abuja, killed more than 100 worshipers at a mosque in the northern city of Kano, and blew up 47 people in a suicide attack on a school.

Nigeria’s military, which has been aided by armies from Chad and Niger, is seeking a final victory against the group before Buhari takes office as president on May 29.

Soldiers are on the offensive in Borno and only one area there, the Sambisa forest, is still under Boko Haram’s control, outgoing President Goodluck Jonathan said on April 30. Two other northeastern states, Adamawa and Yobe, have been cleared of insurgents, he said.

In one of those states, Yobe, a suicide bomber on Friday injured at least 14 students by detonating explosives at a college in the northeast town of Potiskum.

“You can’t take the insurgency away from poverty, or lack of education,” Philip Obaji, an education and development activist, said by phone from the southeastern city of Calabar. “Buhari has said he will focus on fighting the insurgency and rebuilding affected areas, but it will require so much will and so many resources.”

Buhari, a former military ruler, vowed last month that a keystone of his strategy against the insurgents will be to improve schooling in the region.

“Economic underdevelopment has certainly contributed to ongoing support for Boko Haram and will continue to stoke radicalization if left unchecked,” Malte Liewerscheidt, a senior Africa analyst at Bath, U.K.-based Verisk Maplecroft, said in an e-mailed response to questions. The risk advisory company estimates that Boko Haram killed more than 4,700 people last year, double the number in 2013.

“Buhari aims to create jobs in northeast Nigeria through public investment in agriculture and infrastructure, but doubts remain over whether he can secure enough funding to support the initiative,” he said.

Much of the northeast is scrub and sand where millions of people try to scratch out a living from farming. The south is more prosperous, with Nigeria’s oil-producing creeks lining the coast in the southeast and the commercial capital Lagos is located in the southwest.

With 58 percent of Nigeria’s 2015 budget earmarked for recurrent spending, such as salaries, that only leaves only $2.7 billion for capital expenditure in a country with infrastructure gaps in electricity, roads and railways.

“If nothing is done, Boko Haram will resurface in another form,” Murray-Bruce said. “Boko Haram is nothing to do with religion. If people have jobs, if children can go to school, then they aren’t going to pick up a gun.”