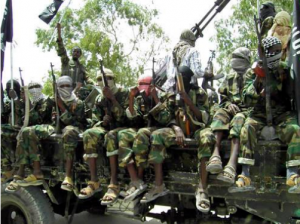 The Nigerian Army had some weeks ago claimed it embarked on clearance operations within Baga and Kukawa in Northern Borno with a view to enabling a safer environment for returning residents.

SaharaReporters gathered that the insurgents also hoisted their flag in the town.

A resident of Kukawa, who spoke with our correspondent, said apart from those killed, several others were left with serious bullet injuries.

“The terrorists have again taken over Kukuwa, even with a statement by the army to our people that the town was safe some weeks ago. Why will the army have no plans to protect civilians In Kukawa and let them return home?,” the resident asked.

Boko Haram has become more ferocious in recent times even though the current administration had often said that the sect had been decimated.

The sect has killed over 15,000 people in Northern Nigeria since the insurgency began in 2009.