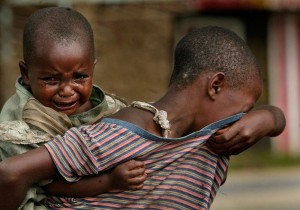 More than 100,000 Nigerian Catholics have been left homeless by Boko Haram’s six-year insurgency in northeast Nigeria and another 5,000 have been killed, a Christian charity said Tuesday. As a result, there are now 7,000 widows and 10,000 orphans in the Maiduguri diocese, Aid to the Church in Need (ACN) told Premier.

A report by the charity also found some 350 churches have been destroyed in the diocese, which encompasses Borno and Yobo states as well as part of Adamawa. More than half of the Maiduguri diocese’s parish centers, chaplaincies and church-run primary schools have been deserted by Nigerian Catholics and many of them are occupied by Boko Haram militants, who control up to 85 percent of the diocese territory.

“People are very scared, and those who are able to return home find there is nothing left,” Rev. Father Gideon Obasogie, the diocesan director of social communications, told ACN, according to Catholic Herald. “A life lived with much fear is terrible.”

The Nigerian army has declared military victories and territorial gains against the Islamist extremists in recent months. But Boko Haram’s insurgency has practically wiped out villages and communities in the northeast. More than 1.5 million people forced to flee their homes in Nigeria were still living in internal displacement centers as of April. Boko Haram has killed more than 13,000 civilians since 2009, the United Nations refugee agency has said.