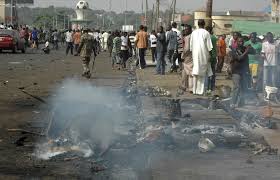 The attacks occurred in Mora, a town located near the border with Nigeria’s Borno state, where Islamic militant group Boko Haram is known to carry out the bulk of its attacks.

Two civilians and a police officer manning a checkpoint were killed, while 29 people were injured. Officials say the amount of casualties may rise.

The blasts are the latest to strike the region, where Boko Haram has conducted a series of attacks since 2009.

The Nigeria-based group, which pledged allegiance to the Islamic State earlier this year, has been blamed for a number of similar bombings, mass kidnappings, executions and ground attacks against remote villages and military bases in Nigeria and surrounding countries such as Chad, Niger and Cameroon, which are part of an 8,700-strong multinational force set to launch against the extremists sometime this year.

Twin suicide blasts killed at least seven people in northern Cameroon’s Kolofata on Sept. 13, Voice of America reports, and two nearly simultaneous bombings on Sept 3. in Kerawa, in the same region, killed up to 40 people.

On Aug. 25, a female suicide bomber described by witnesses as somewhere between 12 and 14 years old killed at least five people at a bus station in northeastern Nigeria’s Yobe state capital of Damaturu.

Boko Haram gained international infamy when it kidnapped over 200 schoolgirls from the village of Chibok in April 2014. Experts have speculated the group might be using abducted children to conduct the continuing wave of suicide attacks.