You are here: Home / Africa / Boko Haram overruns Nigerian Military base in Northeast 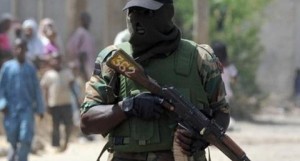 Monday’s attack on Gashigar, on the border with Niger, is the third reported direct attack on the military after months of a lull during which the Islamic extremists hit soft civilian targets.

Army spokesman Col. Sani Kukasheka Usman called the attack a “temporary setback” committed by “remnants of Boko Haram” that forced the soldiers to retreat. He says an operation is in progress to find the missing troopers and “clear the Boko Haram terrorists at the general area.”

It is believed such attacks are the work of a faction of Boko Haram that calls itself the West Africa Province of the Islamic State.