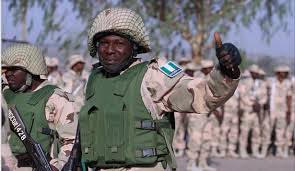 In its effort to keep the general public well informed about the activities of Operation LAFIYA DOLE, the Nigerian Army has established a Media Centre in Maiduguri.

The media centre is based on the directive of the Chief of Army Staff, Lieutenant General Tukur Yusuf Buratai.

The aim of establishing the media centre is to provide real time and accurate information and to provide avenue for a better interaction with the media, particularly on Military operations in the North East.

Addressing journalists during the commissioning of the center, the Theater Commander Operation LAFIYA DOLE Major General Yusha’ Mahmood Abubakar represented by the General Officer Commanding 7 Division Nigerian Army Major General Lamidi Adeosun, urged the journalists to use the media centre to clear areas they were in doubt, instead of relying on unknown sources to get information on Operation LAFIYA DOLE.

The Theatre Commander also extolled the role of the media in the fight against terrorism and insurgency.

He described the media as key partner in the ongoing efforts of ending terrorism in Nigeria.

Gen Abubakar thanked all the media organizations for educating and informing the populace about the happenings in the theater of operation.