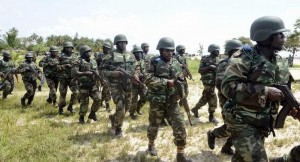 The Nigeria Army has com­menced replacement of troops fighting in the North East with about 1,000 soldiers and officers drawn from the 242 Reconnaissance Battalion in Badagry, Lagos.

Chief of Army Staff, Lieu­tenant General Tukur Buratai, who addressed the soldiers at the weekend charged them to go the North East and wipe out Boko Haram “but, you must fight within the rules of engagement.”

General Buratai said the soldiers must respect human rights and ensure that civil­ians and captured terrorists are treated humanely.

He said the military will maintain the tempo in the op­erations in the North Eastern part of the country until insur­gents are defeated, adding that the defeat of the insurgents is a service to Nigeria. “We will continue to maintain the initiative until Boko Haram insurgents are defeated. This is a service to your nation. The problems of human rights abuse must be avoided, you must ensure you treat civil­ians humanely and also treat captured terrorists humanely.”

The Army Chief urged the soldiers to remain loyal to the President and Commander-in- Chief of the Nigerian Armed Forces, President Muham­madu Buhari, adding that the Army had got intervention from the Federal Government to kit the soldiers and provide mobility and fire power.

He urged the soldiers to maintain standards of disci­pline warning that no heavy weapon must be left unattend­ed to for 24 hours.

Buratai equally told the soldiers to guard their weap­ons and maintain equipment provided to them especially as all the allowances of troops fighting in the north east have been paid.

The General warned men against use of social media and against leaking informa­tion to the public, adding that, “if you are caught sending out information that is related to the operations, you will be dealt with accordingly.”