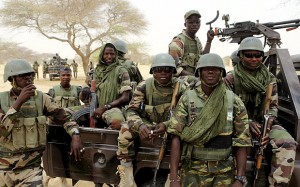 The Nigerian Army has moved to reinforce the troops with Special Forces, following an attack on Sector 1 of 27 Task Force Brigade located at Geidam, Yobe State,  Wednesday evening.

The Director of Army Relations (DAPR), Col. Sani Usman, who confirmed this in a statement yesterday, said the attack by the terrorists was successfully repelled by the troops and the reinforcement sent.

Usman also said the troops killed most of the attacking terrorists and destroying their weapons and equipment.

However and regretfully too, he added, we lost three soldiers and some equipment during the encounter.

Also, the Chief of Army Staff (COAS), Lt-Gen. Tukur Yusufu Buratai who was on operational visit to North-east,  personally visited the troops location to assess the damage done.

At the visit, Buratai used the opportunity to warn the officers of the unit that such ugly incident should not be allowed to happen again.

The COAS also drove into the town and further assessed damage by the terrorists and gave further directives to the troops for the defence and improved security of the general area.

He also met with some of the community leaders and Idris Aloma Polytechnic staff where he assure them of their safety and improved security.

He noted that the situation in Geidam was now calm and people are going about their normal businesses.

Buratai assured the public that this isolated incident would not be allowed to repeat itself.

He also reaffirmed the army’s determination and commitment to route out the Boko Haram terrorists in all their enclaves before the end of this year.

Meanwhile, residents of Geidam on Thursday complained that their foodstuffs and other provisions were looted by the terrorist group.

They said from the look of things, the attack on the town was to stockpile foodstuffs and other essential necessities by the insurgent group.

Some of the residents, who fled into nearby bushes during the attack, on coming out yesterday morning to assess extend of destruction, said they found so many shops looted by the insurgents.

One of them, Abubakar Yusuf said: “We saw  several shops selling food items and beverages among others were burgled.”

He said: “The Boko Haram militants robbed well-to-do individuals in the town of their money, among several other valuables.

“They took away cars belonging to residents, broke shops, loaded the stolen items and went away with it.”

Another resident, Ismail Abubakar, said the town has been placed under curfew as security personnel drove residents who were counting their losses early morning to go inside their houses.

“When we went out to assess the extent of destruction hours after the attack, security operatives came and drove us away. They asked everybody to go back home and to stay indoors until further notice.”

He said that the police barracks and the custom office in the town as well as several shops belonging to the people were set ablaze.

Meanwhile, the state Police Public Relations Officer (PPRO), Toyin Gbadegesin, said the town was calm even though he did not confirm the imposition of a curfew.

Gaidam came under attack yesterday as suspected members of the Boko Haram militants attack the town around 5p.m. an operation that lasted till 9p.m.