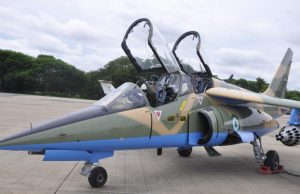 Air Commodore Olatokunbo Adesanya, Director of Public Relations and Information, in a statement, said the artillery piece was concealed under a tree and sighted by a NAF Intelligence, Surveillance and Reconnaissance (ISR) aircraft while on daytime patrol in the Sambisa general area.

He said that about seven insurgents were also observed to be moving out from under the tree.

“The crew on board the ISR platform therefore, immediately called for air strikes by NAF combat platforms.

“Following the alert, one Alpha Jet and one F-7Ni fighter aircraft were scrambled for air interdiction on the artillery piece.

“The Alpha Jet and F-7Ni strikes were observed to have hit the target. Thereafter, the Alpha Jet strafed the area with rockets and the location of the artillery piece was completely engulfed in an inferno.

“Subsequently, Battle Damage Assessment (BDA) footage by a NAF ISR aircraft revealed that the strikes were successful as the artillery piece was neutralised,” Adesanya explained.

Adesanya stated that with the successful attacks, attempts by the remnants of the insurgents to reinforce their capability with the artillery piece was thwarted.