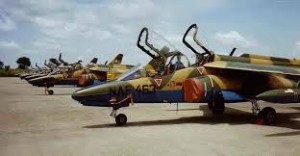 In a renewed drive to crush the fighting will of Boko Haram insurgents, the Nigerian Air Force (NAF) has deployed additional combat platforms to the North East in support of the ongoing counter-insurgency operation codenamed ‘Operation Lafiya Dole’.

The new deployment came on the heels of the recent visit of the Chief of Air Staff, Air Marshal Sadiq  Abubakar to the operational areas.

The newly deployed platforms include the F-7Ni fighter aircraft, Mi-24/35 attack helicopters, Agusta 109 LUH, Supa Puma Combat Support helicopter and ATR-42 surveillance aircraft, which had been away for scheduled maintenance.

The new deployment is aimed at boosting existing military efforts to defeat the Boko Haram terrorists.

It is also expected to enhance the capability of the Nigerian Armed Forces to fight in a more proactive and efficient manner.