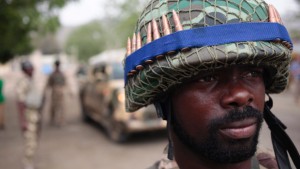 Eight villagers in Cameroon’s Far North region were killed in a raid by Nigerian Islamist group Boko Haram that was followed by a gunbattle between militants and security forces, a government official said on Thursday.

Boko Haram wants to create a caliphate under a strict version of Islamic law in adjacent northeastern Nigeria and has carried out raids into neighbouring countries.

“Wednesday’s attacks killed eight and wounded nine,” said Babila Akaou, prefect for the Mayo-Sava district, referring to the overnight assault in the village of Doulo. “For security forces and Boko Haram militants, we do not yet have a death toll.”

Boko Haram used Cameroon’s north to stockpile supplies and recruits until a government crackdown last year, but the militants have responded this year by ramping up attacks in the area.

Cameroon is part of an 8,700-strong regional force, led by Nigeria, preparing to fight the militants. The United States also announced it would be sending troops and drones to help the fight against Boko Haram.

In neighbouring Chad, a female suicide bomber was arrested on Thursday morning for plotting a bomb attack on a border village near Lake Chad, a local government source said. Police were hunting for four other suspects, the source added.