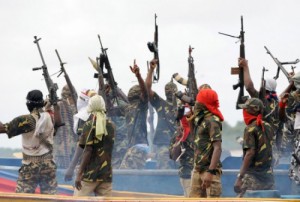 Seventeen attackers died also in the fight, the source told Reuters. Chad is a leading contributor to a 8,700-strong regional force fighting Boko Haram, which has expanded beyond its northeast Nigerian heartland to attack Chad, and other neighbours, Niger and Cameroon.

Meanwhile 3 militants of the Nigerian Islamist group Boko Haram died on Monday morning when a bomb they were transporting exploded in Niger’s Far East region of Diffa, local sources have said.

The bomb exploded when they were about to enter Bosso town, one of the sources told Xinhua, adding the militants were planning to carry out an attack.

On Sunday, ten people, among them one soldier, five civilians and four suicide bombers, were killed in two separate suicide attacks by Boko Haram in Diffa.

The two bombs targeted a military camp and a mosque in the town of Diffa — a few days after two Nigerien soldiers were killed in an ambush by the militants in the same region.

For the last seven months, Niger, like other countries within the Lake Chad basin, has come under Boko Haram attacks from its bases in Nigeria.

A multinational force including troops from Nigeria, Cameroon, Chad and Niger are fighting Boko Haram as Nigerian President Muhammadu Buhari has vowed to beat the group.