You are here: Home / Africa / Boko Haram leader Abubakar Shekau: The jihadist too violent for the Islamic State 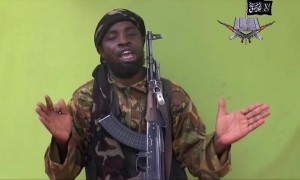 The disputed leader of Boko Haram knows how to cheat death — and do it in style.

After the Nigerian army declared him “fatally wounded” on Aug. 19, Abubakar Shekau appeared in a new video last week to mock the government that has claimed to have killed him at least four times already.

“To the despot Nigerian government: Die with envy. I’m not dead,” a man purporting to be Shekau says in the video.

But if Shekau looks untouchable in the fight against the Nigerian army, he has proved much more vulnerable to threats from within his organization. Less than 18 months after he led Boko Haram into a high-profile partnership with the Islamic State, the Iraq- and Syria-based caliphate shunted him aside in favor of a new representative in Nigeria. In an interview published in the Islamic State’s propaganda magazine in August, Abu Musab al-Barnawi, the son of the late Boko Haram founder Mohammed Yusuf, was named the new leader of Boko Haram.

Shekau rejected Barnawi’s appointment and insisted he was still in charge, setting off a propaganda war between supporters of the two jihadi leaders that raged until Shekau was supposedly killed in an air raid last month. That propaganda war — and the broader struggle for control of the world’s most deadly terrorist outfit — has been revitalized with the release of Shekau’s latest video, in which he appears in front of an Islamic State flag.

At the heart of Boko Haram’s most serious leadership rift in years are fundamental disagreements over ideology, tactics and the group’s relationship with the Islamic State. Boko Haram has never been a one-man show. It has always had competing factions led by powerful local commanders who disagree on how to achieve the group’s goal of an Islamic caliphate. But these disagreements have hardened since Shekau assumed leadership of Boko Haram in 2009. His ruthlessness and zeal for violence alienated many of his followers, and may even have proved too much for the Islamic State to stomach, prompting the group to replace him with a more conservative leader.

Under Shekau, Boko Haram embarked upon an indiscriminate scorched-earth campaign against anyone — Muslim or non-Muslim — who didn’t subscribe to the group’s harsh doctrine. Often, the group’s handiwork was featured in grisly propaganda videos in which Shekau gleefully took responsibility for kidnapping schoolgirls or slaughtering women and children. The approach invited condemnation from mainstream Muslims, including the Sultan of Sokoto, the spiritual leader of Nigeria’s Muslims, who has repeatedly stressed that “more Muslims have died from Boko Haram activity than Christians.”