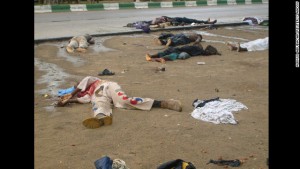 Vigilante Babakura Kolo said 68 people were killed in the attack on Baanu village in Borno state late on Friday while residents said another 11 people were shot dead in two other villages on Saturday and Sunday.

“Reports reached us of an attack on Baanu village late Friday where Boko Haram gunmen riding on horses opened fire on the village. Sixty-eight people were killed in the attack,” Kolo told AFP.

Baanu resident Aisami Ari who fled the attack to state capital Maiduguri on Saturday, also confirmed the attack and the death toll.

“The attackers came on horses around 8.30 pm and began shooting sporadically. The whole village was thrown into confusion and everybody fled. We returned after they had gone and found out they had killed 68 people in the village,” he said.

A government official, who demanded anonymity, however put the death toll at 56.

Kolo also said four people were killed in another attack by the Islamists in nearby Karnuwa village on Saturday.

“They shot dead four people in the village, including the chief imam of the village, his son and two neighbours,” he said.

Local resident Saleh Musa told AFP of a third attack on Hambagda on Sunday where they killed seven villagers and injured five others.

Army spokesman in Maiduguri, Colonel Tukur Gusau and Borno government spokesman Isa Umar Gusau could not immediately comment on the attacks, saying they had been out of town over the weekend.

Attacks by Boko Haram, which seeks to impose a strict Islamic system in northern Nigeria, have killed at least 15,000 people and displaced 1.5 million since 2009.

Donu Kogbara, a renowned columnist for Vanguard newspaper, was abducted Sunday morning from outside her residence in the southern city, which is capital of Rivers State, the daily said.

Ahmad Muhammad, police spokesman for Rivers State, said efforts were under way to rescue her. “We are making serious efforts to rescue her alive. We have our strategies to achieve this but I am not at liberty to disclose them to the public,” he told AFP.

The reason for the abduction of Kogbara, who comes from Rivers State, not immediately clear.  Kidnapping for ransom is common in the oil-rich region. Most victims are set free unharmed once the ransom has been paid.