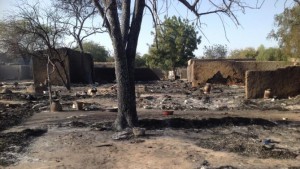 Yesterday, the state governor, Dr Kashim Shettima, visited Gubio, a town located 93km away from Maiduguri, the state capital, to assess the situation in the community.

Over 400 homes, including government buildings, schools (both western and Islamic), 22 vehicles and dozens of motorcycles were found burnt as the governor’s convoy arrive at Gubio.

A military base was also seen to have been overrun by the terrorists, but it could not be ascertained immediately if soldiers had suffered any casualties.

The insurgents, packed in six pickup vehicles, drove into the quiet agrarian and commercial town of Gubio at about 5:30pm when some of the residents were resting outside their homes after a hot day’s job, and children at the playground.

Witnesses said the terrorists announced their arrival by sporadic shooting with assault rifles.

‘’We were playing football around 05:30pm when we suddenly started hearing gunshots and there was confusion all over the town; everybody was running. The civilians JTF tried their best but there was no weaponry,” said Bukar Mondama, a teenage resident of Gubio and member of the town’s vigilante group, the Civilian-JTF.

“They killed 37 civilians including two little boys, while many others suffered injuries. They took their time to select and burn all good homes and all the mosques in the town. They burnt our vehicles that were parked in the town so that we would not be able to go after them,” Mondama told the state governor.

Another Civilian-JTF personnel, Yusuf Modu Gubio, said: “I exchanged gunshots with them and killed some of them but, to my surprise, they were mostly young boys; some of them were dressed in army uniforms and came in military vehicles. They were roaming the streets without anyone challenging them.”

Governor Shettima pleaded with the traumatised residents not to flee their town, assuring them that all security measures had been taken to protect them from further attacks. He also promised the people that his government would rebuild all the destroyed homes.

“I appeal to you not to flee from your homes, we assure you that we are going to rebuild the ancient town of Gubio”.