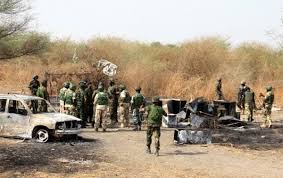 Members of the Boko Haram terrorist group killed 14 farmers in an attack in northeastern Nigeria, local media reported Tuesday according to aa.com.tr.

The terrorists seized 15 famers working in their fields in Ngwom village, located 14 kilometers (nine miles) north of the region’s main city Maiduguri, and cut their throats, according to local media. One of the farmers survived with a deep slash.

Around 3 million people have been displaced in more than a decade of terrorist activities by Boko Haram. Scores of civilians are still trapped in remote communities and are unable to flee due to a lack of security on roads.

The violence, which has killed more than 30,000 people, has spread to neighboring Niger, Chad and Cameroon, prompting a military response.

Borno state is the epicenter of the insurgency.