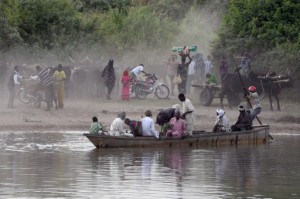 Boko Haram Islamists slit the throats of 10 fishermen in villages near Baga on the shores of the Lake Chad in northeastern Nigeria, a leading fisherman and a resident said Thursday.

“On Monday around 4 p.m. (1500 GMT), Boko Haram attacked three villages on the shores of Lake Chad where they slaughtered 10 people, all of them fishermen,” Abubakar Gamandi, head of the fishermen’s union in Borno State, told AFP.

The account was confirmed by a local fisherman, Buhari Dan-Malam, who lives in Doron Baga.

“The Boko Haram gunmen came around 4:00 pm and they attacked three villages [that are five kilometers/three miles from Doron Baga]. They slit the throats of 10 people,” he also told AFP.

“Boko Haram decided not to use guns so as not to attract the attention of soldiers from Baga. This is why they used knives to slaughter their victims,” he said.

The fishing villages around Baga were abandoned in January after some of the most deadly attacks by the sect.

But “in the last one month, residents in the Baga area displaced by the Boko Haram takeover of the area in January have been returning to some villages secured by the military to continue their fishing business,” Gamandi said.

“They take their [fish] catch back to Maiduguri (the state capital) to sell and make a living because living in the IDP (internally displaced people) camps has become difficult due to lack of food.”

The army had authorized the displaced people to go back to fish in the villages, he added.