You are here: Home / Africa / Boko Haram is ‘just as dangerous’ as Islamic State

‘Crude fundamentalist’ group keeps atrocities within its own region and the West takes little notice. 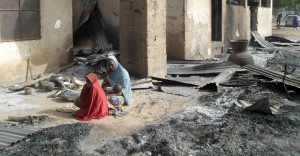 African-based terrorist group Boko Haram is just as deadly, barbaric and “dangerous” as Islamic State (ISIL), but the Western world ignores its atrocities because it doesn’t target Westerners, say experts.

On Sunday (AEDT), Boko Haram unleashed a massacre on the Nigerian village of Dalori, killing 86 civilians, including children.

A witness who hid up a tree during the assault told Associated Press he heard children screaming while they were burnt to death inside their homes.

Experts told the The New Daily that Boko Haram was similarly barbaric to IS given the “crude fundamentalism” it carried out.

“They are just as dangerous [as IS],” University of New England Africa expert and former diplomat Professor Helen Ware told The New Daily.

“Although with the exception that Boko Haram has not threatened any Western countries, only a few surrounding countries.”

The Islamist organisation – which killed more people than IS in 2014 – only operates in Africa and according to Professor Ware, is one of the reasons why Western media and governments don’t focus on Boko Haram like they do ISIL.

“It is essentially because they’re in Africa. It is as simple as that almost,” Professor Ware said. “There is a strong feeling [in the international community] that Nigeria, which is a big country with big oil resources really ought to cope with this themselves.

Professor Ware also said that because America had refused to become involved in African disputes it meant the West had not been embroiled in the turmoil.

She said Britain, which colonised Nigeria, did not want to get involved again and “nor did Nigeria want it to”.

Like ISIL, Boko Haram wants to force Nigeria to be ruled by a strict form of Islam known as sharia law.

Co-operation by force is the way that Boko Haram has sought to implement this type of rule since its insurgency in 2009.

“They have attacked Muslims [lately] becuase they’re based in the north of Nigeria,” Professor Ware said.

“They are attacking their own Muslims to create a Muslim state in northern Nigeria in the same way that IS want to create a caliphate.”

The 2015 Global Terrorism Index reported wrote that: “Most terrorist attacks were in the northeast of Nigeria where Boko Haram is based.”

This, along with other factors, illustrated the “increasing lethality” of Boko Haram, because it was targeting “private citizens” more than it ever had.

The north is also where virtually all of Nigeria’s Muslim population is based, with the south being mostly Christian.

He explained that they traded off the idea that the north was getting a rough deal from the government, and were anti-establishment because of this.

However, he noted Boko Haram’s “deplorable” tactic of targeting civilians from its own faith when carrying out attacks, in particular those who receive western education or aid, for example.

Boko Haram has regularly attacked and killed school students who had been receiving a “Western-style education”, most notably when it kidnapped 276 female students at Chibok in 2014.

More than 600 days after the kidnapping the girls are yet to be released. Some have been forced to convert to Islam and marry Boko Harem members.

He explained this anti-government sentiment was similar to that of IS “even though people in the West don’t like to admit it”.

“They’re crude fundamentalists and nothing can justify that barbaric behaviour,” Mr Hawker said. “But, Nigeria is a seriously fractured nation … the ethnic and religious divisions in the country go back decades and centuries.

“Boko Haram came out of the local discontent … Nigeria is very unequal, the northerners had a cause for complaint, there are real differences, like saying the oil revenue from the south never gets to the north.”