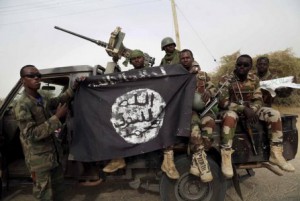 Boko Haram is fracturing as shortages of weapons and fuel foment tensions between its foot soldiers and leaders, women rescued from the Islamist jihadi fighters by Nigerian troops have revealed.

The group abducted an estimated 2,000 women and girls last year as it sought to carve out an Islamic state in North-eastern Nigeria. But the army has freed over 700 in the past week as it advanced on Boko Haram’s last stronghold in the vast Sambisa forest.

According to Reuters, the terrorists began complaining to their captives about lacking guns and ammunition last month, two of the women said, and many were reduced to carrying sticks while some of their vehicles were either broken down or lacked petrol.
A 45-year-old mother of two, Aisha Abbas, who was taken from Dikwa in April, said the fighters all had guns at first but recently, only some carried them.

Even the wife of their captors’ leader, Adam Bitri, openly criticised him and subsequently fled, two of the women said, with one describing Bitri as short and fat with a beard.

Of the 275 freed captives brought to a government-run camp for internally displaced people in the Malkohi hamlet on the outskirts of Adamawa State capital, Yola, only 61 were over 18, and many small children hobbled around visibly malnourished.

The women said they were kept inside, occasionally brought food and sometimes beaten severely. The children were left to run around or do errands for Boko Haram while those of the fighters were trained to shoot guns.

“One evening in April, Boko Haram followers stood before us and said ‘Our leaders don’t want to give us enough fuel and guns and now the soldiers are encroaching on us in Sambisa. We will leave you’,” one of the women, 18-year-old Binta Ibrahim from northern Adamawa said.

“They threatened us but after they went, we were happy and prayed the soldiers would come and save us.”
The women said once the militants spotted two helicopters circling at noon on the day of their rescue, they began trying to sell the women for up to N2,000 (about $10) each. Towards evening as the army approached, the captives refused to flee with the Boko Haram fighters, who began stoning them but then ran away.

“We heard bullets flying around… we lay on the floor. Some of the women were crushed (by army vehicles) and others wounded by bullets. Eighteen were killed. We counted them, they included infants,” Salamatu Mohamed from the Damboa area in Borno said.
The defence ministry was not immediately available for comment.

Mohamed said she gave birth while in captivity and had trouble feeding her newborn, as there was not enough food.
Boko Haram seemed almost unstoppable and fast becoming a regional threat after it gained control of several local government areas in the North-east last year and increased cross-border attacks on Chad, Cameroun and Niger.

Its six-year-old insurgency has killed thousands and forced 1.5 million people from their homes and the group caused a global outcry when it abducted over 200 schoolgirls from the town of Chibok.

The women said the men frequently threatened to sell them or bring them to Boko Haram’s elusive leader, Abubakar Shekau, deep in the forest, who Nigeria has claimed to have killed several times.

Defence spokesman Chris Olukolade told Reuters the man was not a priority target.
Hanatu Musa, a 22-year-old mother kidnapped last June from Gwoza in Borno State, quoted the fighters as saying their leader had deceived them into fighting and killing in the name of religion.

While the Nigerian army, which launched its counter-attack in January, is confident it has the group cornered in the Sambisa nature reserve, a final push to clear them from the area has been curtailed by landmines.

None of the women interviewed had seen any of the Chibok girls, but Abbas said fighters who travelled from a camp in Sambisa where they were held to source food would describe the situation.

“They said the Chibok girls were married off this year. Some sold to slavery, then others (militants) each married two or four of the girls,” Abbas said.

Meawhile, the Borno State Governor Kashim Shettima has declared that the insurgents deliberately raped women with the intention of getting them pregnant so that they would give birth to future insurgents as successors of their violent struggle.
Hence, he advocated a special programme to break the chain of violence possibly created by the insurgents.

In a statement yesterday by his media aide, Isa Gusau, Shettima said from his studies of the insurgents, “there is a general belief among them that whoever does not share their ideology is an infidel and as such his wife and property can be freely acquired by the sect members, with the wives serving as slaves that should satisfy the sexual urges of their masters”.

The governor also theorised that the sect members believe that children fathered by them are likely to share their ideology later in life and succeed their parents in years to come and as such the circle would be maintained.

The governor’s comments came on the heels of the rescue of hundreds of women, girls and children by the military from Sambisa forest in recent days, and amidst reports that 214 women and girls were visibly pregnant, even though it was not clear whether they were impregnated in captivity or were captured pregnant.

Gusau said his boss made the observation while addressing some government officials at a closed-door meeting in Maiduguri, the Borno capital, at the weekend.

“I am happy with the recovery of hundreds of women and children, it is a thing of joy that they have been freed alive. However, I am also very worried about what the future holds for us if what I have gathered about these insurgents works according to their plan.

“I remember discussing this in an elaborate interview I granted to the Sunday Trust last year. These people (Boko Haram) have a certain spiritual conviction that any child they father will grow to inherit their ideology whether they live with the children or not.
“They also believe that whoever does not hold their ideology is an unbeliever that should be killed and rendered homeless, and whatever belongs to him or her becomes legitimate booty recovered from enemies.

“These booties include women that are then allocated to ranking leaders of the sect as sex slaves. The sect leaders make very conscious efforts to impregnate the women. Some of them, I was told even pray before mating, offering supplications to God to make the products of what they are about doing become children that will inherit their ideology.

“After getting their captives pregnant, they keep them to allow the pregnancy mature to an extent of say four or more months to make abortion difficult or impossible for the women due to the danger involved.

“They then abandon the women afterwards to go and give birth anywhere. In most cases, the women return home or get assisted by traditional birth attendants.

“I wouldn’t be surprised if in some cases, some of the women deliver in captivity and the children grow to four or five years since the sect have been operating for years – perhaps the Sambissa camps might have been in existence since 2009.
“The sect is known to usually have medical teams and makeshift clinics for treating injured men and other health challenges. I do not have any official information yet regarding these issues but I have read from some online media houses that many girls were rescued with visible pregnancy and some with newborn babies.

“Of course, I expect our security agencies to establish the paternity of all children recovered from interactions with the victims and other forms of investigation.

“My major concern is how we as stakeholders from the federal and state governments will manage women that might be affected. I am seriously worried over the fact that most women may hate and abandon children they deliver from rape.

“Now, the problem is that these children could go into the streets unattended to; they then lack access to food, healthcare and education. The result is that they could indeed inherit their fathers’ deadly ideology somehow.

“We also don’t know whether the sect members would, after putting a woman in the family way, identify them with particular communities and put a mechanism to monitor the children and whisk them away in the future,” the governor said.

Shettima added that it would be necessary for the federal government to work with the state governments whose citizens are affected, so that medical and psychosocial specialists, as well as child welfare experts that can deal with the situation by properly documenting these children, without stigmatisation, and monitored.

He said all parties would need to work towards raising these kids to become educated future leaders without the ideology of their fathers in order to break the cycle.

“We can achieve this in order to safeguard the future of our communities. We must show love to these innocent children as well as support the innocent mothers. This is equally in our self interest,” he said.

Also more details on the rescue operations by Nigerian troops in Sambisa have revealed that at least three women were killed in a landmine explosion and others crushed to death by tanks as the military moved in to rescue them from Boko Haram, one freed hostage said on Sunday.

Binta Abdullahi, who was kidnapped from a village near Madagali, in the north of Adamawa, more than a year ago, described the hostages’ ordeal as the soldiers moved in.

“When the military stormed the camp where we were being held, our captors told us to take cover under trees and shrubs to avoid military shelling,” the 18-year-old told reporters in Yola.

“Some women who hid under trees were crushed by military tanks which mowed them down without knowing they were there.
“After soldiers subdued Boko Haram fighters and rescued us they loaded those too weak or sick to trek into vehicles and asked the rest of us to walk behind… to avoid stepping on landmines planted by Boko Haram all over the place.

“At least three women and some soldiers were killed when a mine exploded after a woman stepped on one.”
Her two sisters, who were also kidnapped, managed to escape but she stayed as she was looking after some children, aged four and three, whose mothers were not among those kidnapped.
“I couldn’t leave them,” she said.

Her testimony chimed with that of other former hostages, who described forced labour, marriage, sexual and psychological abuse by their captors, as well as being compelled to fight on the front line.

“They asked us to marry Boko Haram members but we told them there was no way we could get married because we were already married to our husbands,” she said.

“They said since we would not marry them they would sell us as slaves at the right time.”
Lami Musa, 19, was four months’ pregnant when Boko Haram fighters stormed her village of Lassa, near Chibok, five months ago.
She said she was not married off because she was pregnant but was told she would be after she gave birth.
“Fortunately I was rescued a day after giving birth. I thank God,” she added.