You are here: Home / Africa / “Boko Haram in disarray now, we will soon defeat them” – Defence Headquarters 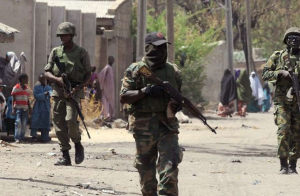 The Defence Headquarters has said that the end of insurgency in Nigeria is in sight and that all known camps of insurgents on Nigerian territory have been dislodged.

The Acting Director, Defence Information, Col. Rabe Abubakar, said this yesterday in Abuja when he paid a courtesy call on Mr Ima Niboro, Managing Director of the News Agency of Nigeria (NAN).

Abubakar said the military would continue to dominate the insurgents’ hideouts in the North East so that the Boko Haram menace would end soon.

“We, for the past weeks have been in the North East to ensure that we do all what we could as military personnel to quell the activities of these insurgents.

“So far so good as I’m speaking with you the major hideouts and the major camps of the militants are no more.

“They are in disarray now, the central command of the terrorists, the center of gravity is no more with them so are scattered all over the place.

“So, what they resort to doing now is one of the characteristics of insurgency where they identify sub-targets to attack it.

“So the issue of suicide bombing here and there is not in any way bravery but is a sign of decline in their activities.

“They are now very weak and we will maintain that level of momentum so that they will not regroup again.’’

Abubakar said that information was one of the weapons of the Boko Haram insurgents and that they capitalised on it to instill fear on citizens and to portray their successes even when they have been conquered.

“Insurgency strives on information because it is the oxygen of terrorists, they live by it and survive on it’’, he said.

Abubakar identified the media as important partners in the fight against insurgency and sought media partnership to help in moving the nation forward.