You are here: Home / Africa / Boko Haram in Cameroon: 4 dead and one military post of the army attacked by terrorists 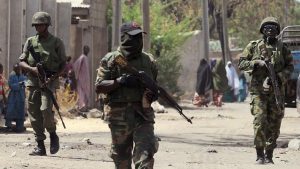 The proliferation of suicide attacks in some localities in the Far North Region has led a senior Cameroonian army officer to suspect a great complicity between some inhabitants in a war zone and terrorists in Boko Haram, like reported by lcclc.info.

In the evening of yesterday, Monday, July 03, 2017, another suicide bombing was recorded in Homaka, a locality in the Mora subdivision of the Far North region. According to sources at the Ministry of Defense, a suicide bomber exploded his bomb in the middle of a group of people, killing four people. There are also about ten wounded who were transported to the Mora hospital.

A few hours before the suicide bombing, suspected Boko haram terrorists launched an attack on a Cameroon army military post from their base in neighboring Nigeria with the aim of making carnage. Operation missed thanks to a prompt reaction of the valiant Cameroonian soldiers.

The official record of these terrorist attacks and the reaction of the authorities are awaited. However, during a recent weekly broadcast by the Ministry of Defense (Mindef) broadcast at the national radio station of Cameroon from Yaoundé, Colonel Didier Badjeck, Head of the Mindef Communication Division, suspected a complicity between some Civilian populations in war zones and terrorists of Boko haram.

These suspicions cause the defense and security forces to organize regular round-ups in localities that frequently suffer the exactions of the Islamist sect of Nigerian origin.