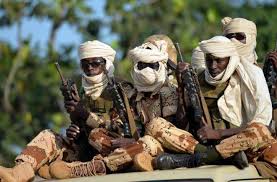 Boko Haram fighters have killed at least 9 people and kidnapped dozens, including children and teenagers, from Cameroonian villages on the border with Nigeria, a local leader said today.

Heavily armed attackers came from Nigeria into the villages of Tchakarmari and Kangaleri early in the morning on trucks, said Tchakarmari village chief Kadzamare Amin.

“They burned at least 15 houses and slaughtered six men and three women whose corpses we are still to bury,” he told The Associated Press from the area that is less than 20 kilometers (12 miles) from Nigeria’s Borno State, where Islamic extremist group Boko Haram regularly stages attacks. He said that he saw dozens being taken.

“We are still investigating the authenticity of the report but our soldiers have told us there was an incursion in the area situated 11 kilometers from Mora in Mayo Sava Division,” said Midjiyawa Bakary, governor of the Far North region of Cameroon.

While there was no immediate claim of responsibility, Islamic militants from the Boko Haram group have been blamed for scores of attacks in the region this year.

Boko Haram, which was founded in neighboring Nigeria, has pledged its allegiance to the Islamic State group and has vowed to attack Cameroon because the country has supported the Nigerian military’s mission to defeat Boko Haram.

Troops from Cameroon and Chad are fighting Islamic extremists in several communities on Cameroon’s border with Nigeria. Cameroon has arrested dozens accused of promoting radical ideology and collaborating with Boko Haram.

Boko Haram has kidnapped hundreds of girls and young women from near its base in northeastern Nigeria, residents and human rights groups say.

The military has also freed hundreds this year, but there has been no word of the schoolgirls whose abduction brought an international outcry.